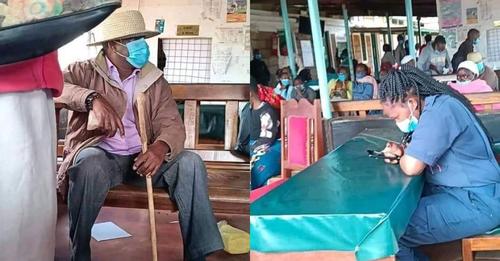 On Thursday, October 21, Tharaka Nithi governor Muthomi Njuki made an impromptu visit to the county’s Level 5 hospital to inspect operations and how services are delivered.

Just to have the first-hand experience of how locals are served at the facility, the county boss showed up while disguised in regalia synonymous with some elderly village man

He is said to have found desperate patients waiting in a long queue as staffers showed no urgency.

One of them, a security guard, is seen busy on her phone while on duty.

Njuki himself waited for a few hours before he could be served.

The governor promised to mend how services are delivered at the facility after witnessing the laxity depicted by the staffers.

Muthomi was lauded for the effort he showed in smooth lining the delivery of services at the county facility.

“This is very good at least he is not waiting to get information from the SYCOPHANTS who always cheat governors that everything is okay… Kudos Muthomi Njuki,” said Lawrence Kariuki.

However, even as the governor manifested his commitment to ensuring smooth service delivery to the patients seeking services at the hospital, his administration was called out for neglecting the hospital.

As seen in the viral photos, the facility appears to be in a bad state, a section of Kenyans urging him to renovate it before embarking on inspecting staffers.

“The hospital already looks so dilapidated…shows that he has failed somehow in his task…So continue…What happened eventually? Did he catch someone?”

“He should be ashamed of himself in the first place, the place looks horrible and dilapidated from the onset!”

“Before doing this build good hospitals equip well and then employ enough personnel and the hospital will run well.”

“Undercover to a public hospital with no drugs, rundown facilities and demotivated staff…What will it help??”

On Campus Accommodation At The University Of Alabama In Huntsville