The charm of Githurai and why politicians love it 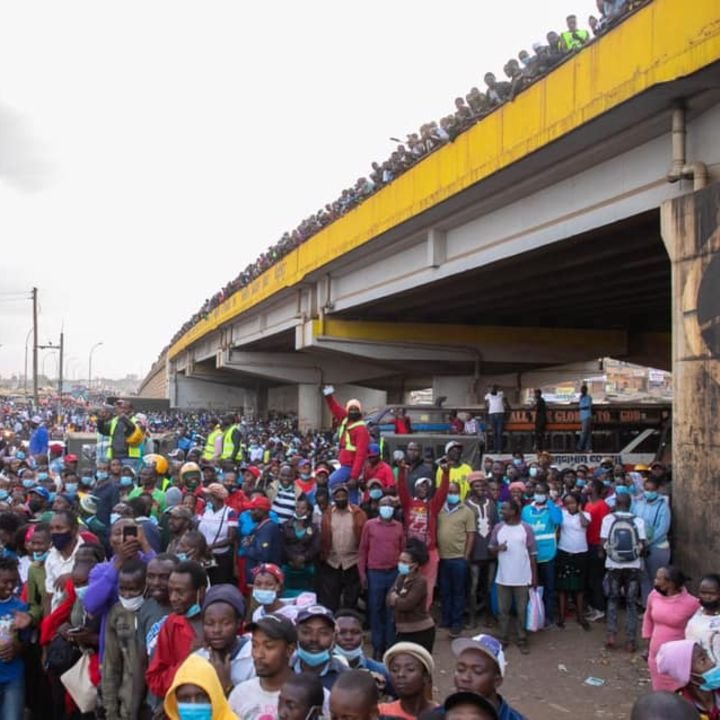 Githurai, a populous town in Kiambu County, is becoming a household name, not just for the famed deceit of its traders but also for its new status as a favourite haunt for leading politicians.

In the past few months, politicians targeting Mt Kenya votes have made stopovers here, taking pictures of themselves surrounded by a sea of humanity that they then share on social media, much to the awe of their followers.

The most recent visit was by former premier Raila Odinga, who was on a charm offensive in Mt Kenya last week.

“We will leave here by road through Sagana, Kenol, Thika, Juja and finally Githurai, where we will address Kenyans,” he announced when he left Laikipia.

The first four stops were typical political rallies, but the last one, in Githurai, was deafening.

Thousands of people, young and the old alike, filled every available space as soon as Mr Odinga and his entourage arrived.

Activities on the always busy Thika Road were halted.

This they did while chanting songs of praise to “jamba”, a Kikuyu word meaning hero. “Githurai: Mambo kwa ground ni DIFFERENT!” charged the ODM leader on social media.

Whereas the grand entry and show of unified purpose looked good for Mr Odinga, the event exposed a sensitive underbelly of the real problem ailing Kenya’s young people, and more so those living in or around Githurai.

Interestingly, in his speech to residents, DP Ruto thanked them for “waiting” for him and his team.

“Thank you so much for waiting for us. I want to assure you all that all the pledges we made, like the construction of a market, and water, I will make sure all these things are fulfilled,” he said, much to the jubilation of the thousands in attendance.

As in Mr Odinga’s case, photos showing the sea of humanity were shared by the DP’s social media team, much to the admiration of his followers.

READ ALSO  The Trip To The Beautiful City Of Miami.

And in October 2020, at the height of claims that President Uhuru Kenyatta had lost support of his Mt Kenya base to his deputy, he made an iconic stop over in Githurai with the photos of the event shared widely on social media by PSCU.

But what makes Githurai resonate with politicians?

To some observers, the high turnouts, even on weekdays, is not a measure of anyone’s popularity. Instead, it brings out the challenge of the country’s unemployment rate – people are idle.

But to others, Githurai can be used to measure a politician’s popularity. Moses Mwangi, who has lived in Githurai for the past 15 years and sells fruits, believes that politicians love his town because it is a business hub bringing many people together.

“There are many people here. This is a busy centre. It is like the entire Central Kenya is here and politicians love crowds,” he told Nation.Africa.

“Sometimes I go listen to the leaders, but sometimes I do not. Kenyans are now literate. They can go to the rallies many times but they already know who they will vote for.”

But Samuel Maina, who runs a footwear business in Githurai, expressed his concerns about the numerous rallies.

“This place is full of idlers. When Raila came on Monday, it was full. Those young people that you saw there have no jobs. They wait for such opportunities and hope that they will get some money from the politicians,” he said.

Ruth Wanjiru, a book vendor for the past seven years, said she is used to political rallies, explaining that politicians are drawn to Githurai  because it is the perfect place to interact with common wananchi.

“Now that the crucial debate is on the economy, all politicians passing through Githurai want to stop and be seen to be caring about the hard-working Kenyans and this is exactly where they will find such people,” she said.

“Our youth are idle. They assemble in seconds when something minor happens. Now you can imagine a political rally, they will come in thousands,” she said.

For Joseph Muya, a boda boda operator in Githurai for the last four years, the many rallies excite him. “Political rallies mean money! I recently made Sh1,500 in the last rally held here on Monday. We were gathered by agents, who informed us that Mheshimiwa was coming and our job was to usher him to the market,” he said.

“We only care about money. As long as they come with money, we will always show up at the rallies.”

Though the young people enjoy the rallies, Naomi Njuguna, a street vendor who sells clothes, said the rallies are a security concern and should be monitored by more police officers.

“The stage for Thika-bound buses is the worst during rallies. Phones disappear and women’s handbags are stolen by the rowdy youth, who are mainly unemployed and idlers. But some rallies are peaceful and politicians, knowing we have many idle youths, must stop at Githurai,” she said.

Communication strategist and political analyst Mark Bichachi argues that Githurai is a favourite trick that politicians who want to be seen with crowds in Kiambu love to play.

“This sends a message to Mr Odinga’s rivals, who have always believed that he can never climb Mt Kenya. His visit to Githurai, which is just at the foot of the mountain, sends out a strong message to his opposition,” he said.

Seasoned political analyst Herman Manyora, however, explained that Githurai, easily accessible thanks to the highway cutting through it, and its busy markets make it populous and thus every politician’s dream place to hold a rally.

“Githurai is the Kondele of Kiambu. If you want a successful rally with crowds, Githurai is the place to go. It is just like Kibera in Nairobi. Thousands upon thousands will flow in even uninvited,” he said.

This, he explained, is because many people coming from Central Kenya often stop in Githurai, which, as a gateway to Nairobi, offers many business opportunities.

As such, people buy their items, whether for personal use or trade, and go back home.

“Why would someone use two hours to come from Nyeri to Kasarani and then waste a full hour in a traffic jam at Ngara? This has seen many people opt to stop in Githurai, spend their day there and then go back home in the evening,” Mr Manyora said.

While agreeing with this line of thought, Mr Bichachi added that Githurai, as a cosmopolitan centre, offers politicians a cushion, as they are sure people will always show up whenever they visit.

“Githurai is a place with a ready crowd along a busy road that is very accessible. It is cosmopolitan too, it does not belong to any tribe, and any politician is welcome,” Mr Bichachi said.

“Again, it is also accessible to the media, who can rush from Nairobi in a few minutes and get nice pictures showing how the politicians have crowds and that is a plus to their political mileage.”

However, Mr Manyora cautioned that the availability of young people to attend any rally at any hour of any day pointed to a big problem.

“We are sitting on a time bomb. Our youth have no jobs…. In fact, I can say that for every one person who has something to do in Nairobi and its environs, there are up to nine others who have nothing to do. If everyone going to town had something to do, the town would be very clean with very few people,” he said.

He also noted that the large crowds offer a cover for criminals.

“Most of the people in Githurai have lost their identity. They are just a bunch of youth coming in from every corner of the country. No one can point to the ancestral home or family of his neighbour,” he said.

“This factor alone draws many youth to this place, where they can commit any crime and go hide back at their homes.”

My Story: My father was the friendliest person I knew. Alzheimer’s changed everything