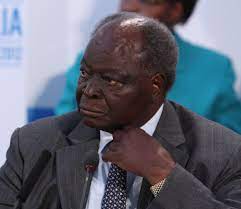 The National Council of Churches of Kenya (NCCK) has joined the nation in mourning the death of third President of the Republic of Kenya, Mwai Kibaki.

The Council remembers with gratitude that Kibaki dedicated more than five decades of his life to the service of the people of Kenya.

The secretary General for the Council Canon Chris Kinyanjui said they treasure the great achievements of Mwai Kibaki that will always elicit in their hearts, minds and memories.

“During his tenure as the Third President, Kenyans attained and enjoyed tremendous expansion of democratic space and freedom of expression. The psychological and mental impact of this freedom and space is immeasurable, and something Kenyans will always treasure and jealously guard,” said Kinyanjui.

He said that Kibaki consolidated Kenya’s nascent democracy when he promulgated the Constitution of Kenya 2010, which bears one of the most progressive Bill of Rights on Earth.

“It was during his Presidency that Kenya witnessed leap-fold economic growth, enhanced fiscal discipline and economic recovery. Kenyans received a dose of hope that life can be better. The Church treasures the seeds of national cohesion and integration planted during President Kibaki’s tenure. As a statesman, he saw collaboration, even with former competitors, not as an abstract ideal but a new spirit in the path of peace and prosperity,” he further added.

The NCCK prays that the Almighty God will grant the family, friends, and Kenyans peace and comfort during this period of mourning.

“President Kibaki was a God-fearing man who served God in his generation, may he now rest in God’s presence – Acts 13: 36,” he concluded.

READ ALSO  You Cannot run for Presidency, Registrar of Parties tells Kalonzo
Related Topics:News
Up Next