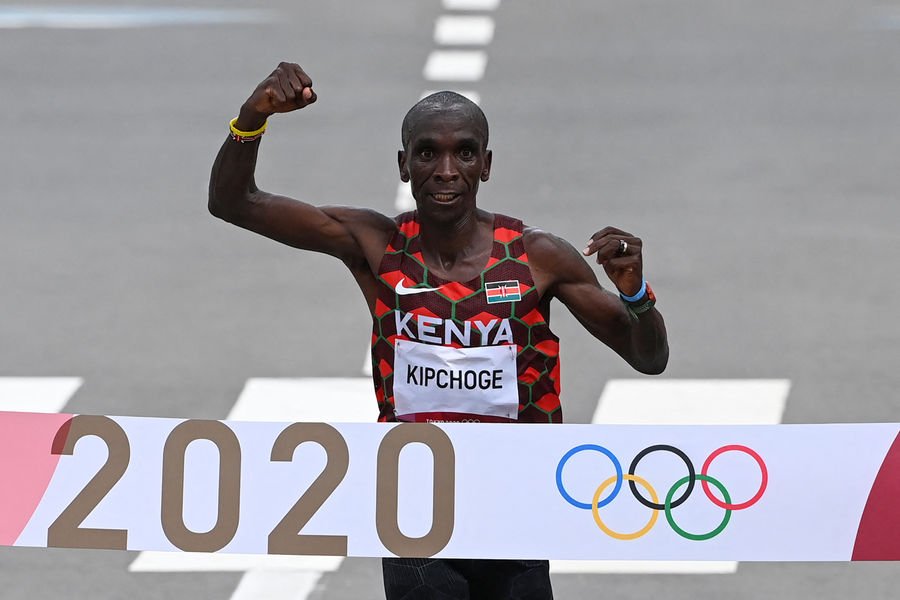 Kenya’s Eliud Kipchoge underlined his credentials as the undisputed king of the marathon with a totally dominant run to retain his Olympic title on the streets of Sapporo on Sunday.

Abdi Nageeye of the Netherlands claimed silver in 2:09.58, just ahead of Belgium’s Bashir Abdi in bronze.

Kipchoge’s winning margin of 1:20 was the biggest since Frank Shorter’s win in the 1972 Munich Games.

The 36-year-old’s victory, his 13th win in the 15 marathons he has raced since 2013, came a day after teammate Peres Jepchirchir secured back-to-back women’s Olympic marathon titles.

“I think I have fulfilled the legacy by winning the marathon for the second time, back-to-back. I hope now to help inspire the next generation,” Kipchoge said.

“It means a lot for me, especially at this time,” he added of winning his second gold medal.

“It was really hard last year, it (Olympic Games) was postponed. I am happy for the local organising committee who made this race happen. It is a sign that shows the world we are heading in the right direction — we are on the right transition to a normal life.

“Congratulations to them that they made this Olympics happen.”

Unlike in Tokyo, where stringent Covid-19 restrictions have forced the Games to be held behind closed doors, thousands of spectators lined the streets of Sapporo, the host city of the 1972 Winter Olympics that lies more than 800 kilometres (500 miles) north of the capital.

The organisers’ decision to move the race to the city, however, has backfired, with unseasonally hot and humid temperatures there making for gruelling conditions for the runners.

Sunday’s race saw 106 runners representing 45 countries and the Olympic Refugee Team set off from the Odori Park in the heart of Sapporo in temperatures of around 27 degrees Celsius (81 degrees Fahrenheit) and a stamina-sapping 80 percent humidity.

A large lead group of about 50 runners, including Kipchoge, defending world champion Lelisa Desisa of Ethiopia and Rio bronze medallist Galen Rupp of the United States went through 10km in 30:53.

Two early casualties of note were Uganda’s Stephen Kiprotich, who was gold medallist at the 2012 London Games, and a world champion in Moscow a year later, and Ethiopian Shura Kitata Tola, winner of last year’s London Marathon in which Kipchoge finished eighth in just his second blip in his marathon-racing career.

Daniel do Nascimento of Brazil, a 2:10 marathon runner, also dropped out with cramp, as Kipchoge led an 11-strong group through the 1:30 mark.

The Kenyan then kicked away on a solo breakaway as the pack split further, opening up a 27-second lead through 35 kilometres (1:46.59).

Cherono, Ayad Lamdassem of Spain, Abdi and fellow Somali-born Nageeye were left battling among themselves in the chasing pack.

“I wanted to create a space to show the world that this is a beautiful race,” Kipchoge said of his surge away from the pack.