The IEBC is behaving like a puppet, I don't have trust with Chebukati- Kenyans 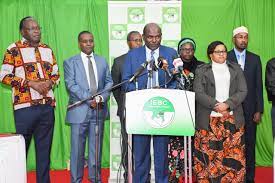 Murang’a County Governor Mwangi Wa Iria who is also the Party leader of the Usawa Party has expressed his disappointment in the Independent Electoral and Boundaries Commission (IEBC) which he said is not independent.

This follows after his disqualification from contesting for presidency over misappropriation of Kshs.500 million from county coffers.

“The IEBC is behaving like a puppet, it cannot make independent decisions. Why deny Kenyans of goodwill their democratic rights to contest for various posts without intimidating and humiliating them? It’s sad how people have been blocked from continuing with the race to the presidency and other posts,” he said.

He said his party will be changing to a resistance movement to ensure democracy is achieved as the people that used to fight for it are feeding from the kitchen, he said referring to Azimio La Umoja Coalition flagbearer and his running mate.

The IEBC revoked its certificate of clearance of the candidature of Walter Mong’are alias Nyambane.

Why did the IEBC issue him with the certificate only to deny him and cut him hopes in the eleventh hour? Who will now trust this commission?

Mong’are was the first presidential aspirant to be cleared to run for the top office on May 30, 2022.

However, on Monday, June 6, the IEBC said they had discovered a discrepancy in his academic papers.

The commission tribunal behaves as if it takes some of its directives, rulings, or orders from some quarters on how they should conduct their businesses.

Another politician from Nyanza who is also a Ward Rep aspirant ranted on social media about how the IEBC is not transparent after finding out he is not registered in the usual polling station.

He got his name registered as a voter in Washington DC, USA.

“My good people, I personally as Hon Makaduol, I also don’t trust now Chebukati and IEBC after I got my Vote this week as a registered voter in Washington DC USA, which vote since Multiparty time I have been voting in Kenya.  When I read the campaign rules drawn by Chebukati contravening Democracy, Transparency, Accountability, Integrity and Sovereignty of Voters; the IEBC and Chebukati’s failure to comply with the Supreme Court Landmark Orders to transform IEBC and its operation regulations, I strongly distrust Chebukati with illegalities and irregularities in conducting this year’s elections,” he wrote.

Related Topics:IEBCKenya politicsNews
Up Next

Ex-Kenyan journalist wins Ksh10 Million in the US