The man that was Nyachae 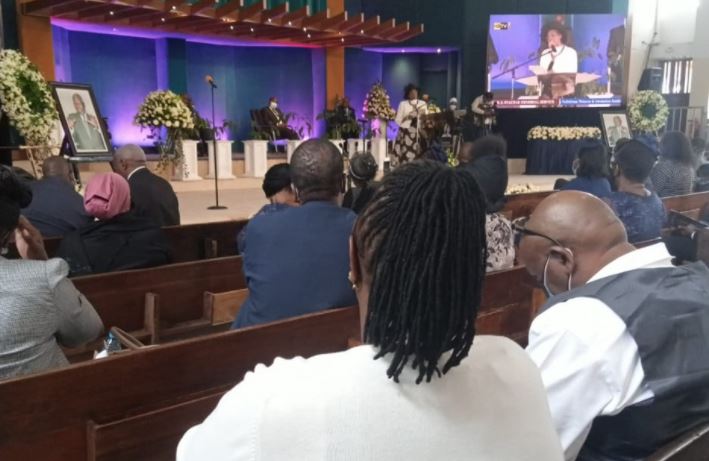 Family, friends and leaders who congregated at the St Maxwell SDA church, Nairobi remembered the Statesman for his contribution to public service and to the country at large.

The president praised Nyachae’s integrity and commitment to duty during his years of service, recalling how he (Nyachae) always had wise words for him whenever he sought advice.

“Titans of history like the late Mzee Nyachae only die a physical death,” Uhuru said in his speech.

Uhuru was absent at the service but had his speech read by Health CS Mutahi Kagwe.

The former prime minister reminisced of their political escapades together, adding how Nyachae was a great Kenyan patriot and the tremendous contribution he had made to the country.

ANC party leader Musalia Mudavadi recalled how he served in the same cabinet as Nyachae, and his no-nonsense attitude.

“He always stood for merit. He didn’t believe in short cuts,” he told the congregants.

Wiper Party leader Kalonzo Musyoka praised Nyachae’s towering personality and good listenership, while Interior CS Fred Matiang’i was grateful that he had the privilege to work closely with the former minister, to the extent of being called ‘son’.

His children who lit up the service with tales of their father reminisced on his disciplinary actions, and how he stuck by ‘spare the rod, spoil the child’.

“If we underperformed, you didn’t hold back.”

Nyachae died on February 1, aged 88 and will be buried on Monday in Nyosia, Kisii County.

His family confirmed that he was diagnosed with cancer in 2012 and received multiple treatments in Kenya and the UK.

The former cabinet minister officially joined politics in 1992 and served as Nyaribari Chache MP for 15 years.

He contested the presidency in 2002 on a Ford-Kenya ticket and came third after Mwai Kibaki and Uhuru Kenyatta.

He would then retire from active politics in 2007 to focus on family and business.

Nyachae was awarded several accolades throughout his career.

‘My character is like Olivia Pope without marital scandals,’ Janet Mbugua on TV comeback

”Give Me My Flowers When I’m Still Alive” Yvonne Okwara