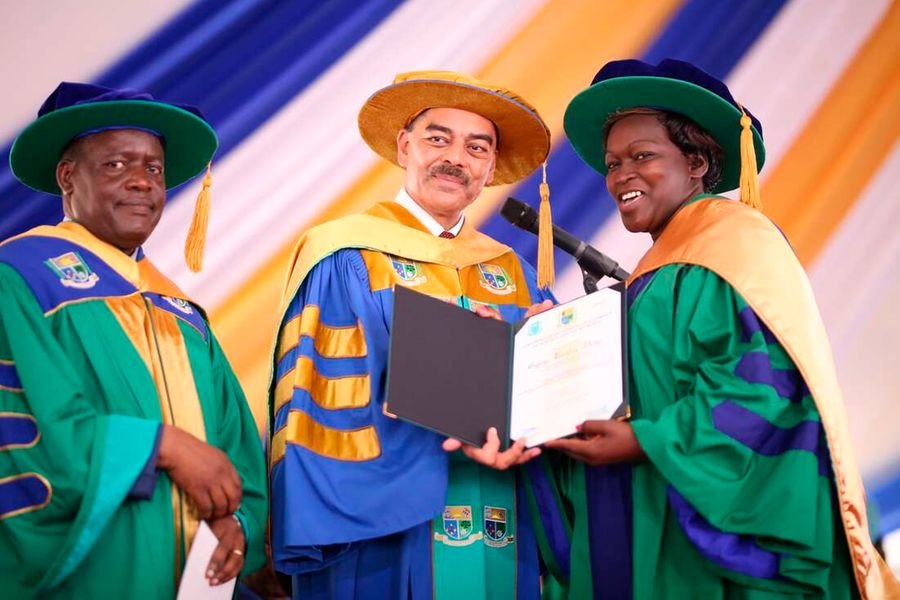 In December 2018, Mr John Timon Owenga and Mrs Violet Otieno were on the same podium as President Uhuru Kenyatta and opposition leader Raila Odinga, where they were all conferred with various degrees in recognition of their outstanding performances in a variety of fields.

President Kenyatta and the Orange Democratic Movement (ODM) leader were awarded honorary degrees for exemplary service to the country, following the ‘Handshake’ – their political truce – that brought peace to the nation.

While Mr Kenyatta and Mr Odinga were awarded honorary degrees of Doctor of Sciences, from the Jaramogi Oginga Odinga University of Science and Technology by Chancellor Vimal Shah during the school’s sixth graduation, the two scholars were conferred with their PhDs and got new titles, from then on referred to as Dr Owenga and Dr Otieno.

Dr Owenga, 50, has a PhD in Educational Psychology, while Dr Otieno has a doctorate in Early Childhood Development Education (ECDE).

Almost a year later, on November 1, another teacher, Ms Daughty Akinyi Onyango, was among the 3,000 graduands who celebrated their achievements at the same university. She graduated with a PhD in ECDE, an accolade that led to her celebration in the Sunday Nation, where she was featured.

She started her career at a relatively low level of a P1 teacher in 2003.

It took these three PhD holders time, energy, finances, and a lot of sacrifice to achieve one of the highest levels of education in Kenya. They hoped to get a chance to serve in big jobs, however, their journey has been no walk in the park.

The Nation caught up with the three scholars at their working stations — primary schools in Kisumu County, where they are teachers.

Underneath their radiant smiles and humility are individuals who are choking with a wealth of knowledge that they yearn to put to use at a higher level, but which they cannot for lack of opportunities.

Many would expect them to be teaching in universities, at least, or holding plum positions in government or the private sector.

But they remain stuck in the primary schools, doing what they know best — imparting knowledge to future generations.

They grapple with an array of issues, including an employer’s policy that does not issue career progression for P1 teachers with PhDs.

They also have to be careful how they relate with colleagues at work so as not to intimidate them.

They are often asked difficult questions on why they are ‘doctors’ in primary school.

Dr Akinyi was employed in 2003 by the Teachers Service Commission at Anjech Primary School in Homa Bay County, where she taught for a year before she was transferred to Atela Primary School in the same region.

In 2013, she moved to Kisumu County, where she has been teaching at Sondu Union Primary School and is currently a Grade One teacher at Agai Primary School in Nyakach sub-county.

“I am a PhD in Early Childhood where primary schools fall, and I already have a job, but if other opportunities, for instance in the Ministry of Education or Kenya Institute of Curriculum Development, where I am a member of a panel came, I would move,” she says.

“I have tried applying for all these jobs in vain and I have no option but to be here in primary school,” says Dr Akinyi.

She doubles up as a part-time university lecturer in the evenings and on weekends. Universities claim they cannot employ her permanently because they do not have enough funds.

Sometimes she is invited by schools as a motivational speaker and this is another avenue she uses to raise extra income to feed her family of two.

Cumulatively, she has been teaching in primary schools for more than 18 years, three of which have been since she graduated with the PhD.

About 40 kilometers from Dr Akinyi’s station, is Dr Owenga, the deputy headteacher of Rabuor Primary School in Nyando sub-county. He revealed that many of his pupils and their parents are surprised there is a ‘Doctor’ teaching in their school.

“My innocent pupils ask me how come I am a doctor and I am teaching in a primary school instead of being in a hospital,” he says.

“It is at this point that I explain it to them. To my colleagues, it was difficult for them to refer to me as ‘Dr’ since in schools we are either Mr or Mrs,” says Dr Owenga.

Sometimes the title is a curse, especially when relating with his bosses who have lower levels of education.

“At some point, even if I have a better idea when we are discussing something, I am reluctant to share it because others may view it as belittling or trying to show that you are more knowledgeable than them. It is really a tough balancing act,” says Dr Owenga.

He points out that he also has to teach the exact number of subjects like the other teachers, even when sometimes he feels like he should be doing more.

Dr Owenga is good in research, especially on social psychology, where he can even advise politicians. He is also an expert in behavioural science, health, and environmental psychology.

He believes the motivation for furthering one’s studies is going up the career ladder.

“Everybody knows who is supposed to be teaching where, but nobody talks about us. Even when giving a motivational talk to schools, they would expect you to come from somewhere higher, not a ‘doctor from a primary school’ addressing them, some will not even trust you,” says Dr Owenga.

The same challenges are experienced by Dr Otieno, who had to transfer from her previous school because of frustrations from senior colleagues.

She credit’s God’s grace and humility that she has been coping with a situation she describes as ‘choking’.

She has had to hide her title to avoid being scrutinised and for the ‘sake of peace’ among colleagues, she says.

“To some extent, it is a title that scares people who are your seniors who may not have reached such a level. Any small thing that you do, even coming late to work, you are judged, with some thinking you are taking advantage of your qualification,” says Dr Otieno, a teacher of mathematics and science at Lake Primary School.

She says it is sad that universities are not able to give them opportunities, yet some underqualified individuals get jobs.

Even in county governments, some who don’t fit the bill are heading the Education dockets and running ECDE programmes, she laments.

“The best opportunities are in the universities, yet we don’t get them, leaving many of us to rot in the villages. The other day we were thinking aloud when the ministry announced that teachers are going to be trained in diploma in primary, just who are these people going to train these teachers?” asked Dr Otieno.

The trio believe the Teachers Service Commission (TSC) should have a scheme to accommodate the career progression of P1 teachers with Masters and PhD degrees.

To date, they are still waiting for an opportunity to climb up the job group ladder, or join universities, some which are grappling with understaffing.

They are also eyeing government departments involved in research, county governments and the Ministry of Education.

What, however, drives all of them to keep doing what they do in primary school, apart from the much-needed income, is the enthusiasm with which the learners are ready to be taught.