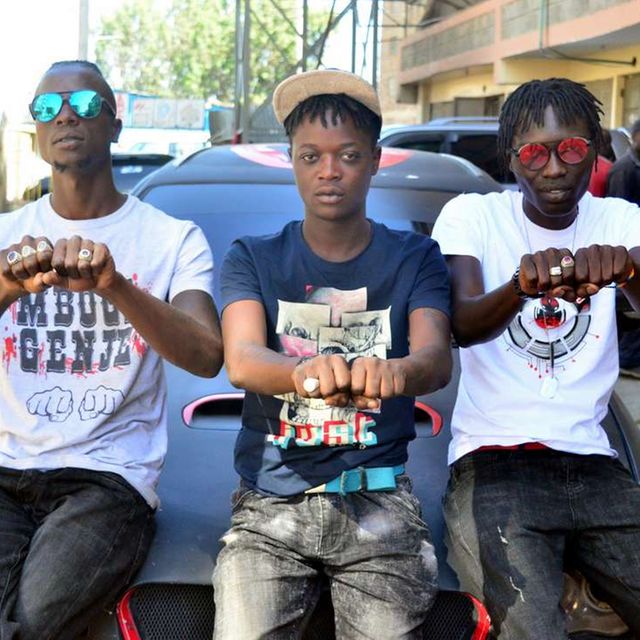 Question: What is Gengetone to you and how can you describe your genre?

Guzman: We can only describe Gengetone as a type of genre that has helped the youth in Kenya in a big way. This is where majority of us are flocking to to express who they are.

What does Mbogi Genje mean and is your sheng specific to Umoja or Eastlands?

(It means) a closed fist which is set to conquer or baddest unit. It also means we are the best in spiting lyrics. Umoja or Eastlands is the source of sheng, unanipata? It doesn’t mean it’s specific to here.

How did the three of you meet and when did you decide to start the group?

Militan: We grew up in Umoja and used to just hang out together. It is not music which brought us together. One day, we said that we should try something different instead of just hanging out and doing nothing.

Guzman: Everyone was to come up with lyrics and then we went to a studio in Buruburu. We released Ngumi Mbwegze and it was very well received. That was a game changer; we brought something fresh into the industry. Walipenda vako (style) yetu lakini shida ilikua ni hawakuwa wanelewa tunasema nini, but saa hii kila kitu iko mbwegze (alright).

What happened between you guys and Gotta City? Who started the fight?

Guzman: These are fellows we used to hang out with in the estates. They also want to release songs but they want to ride on our popularity.

Smady:  As you know that at the moment we are at the top of this game. A lot of people will come out and try to ride on our fame. What happened was just a small push and pull between Guzman and a member of Gotta City and they just started confronting him.

Militan: Regarding the video clip that was shared online, it might have been a set up as that is the day they were shooting a video and there was a crowd. One of them took a video a shared it online.

Smady: Even when you look at the clip, you will see Militan trying to separate the two. We are entertainers now and we do not have time to fight other people. Tuko league yetu.

You won a Kisima Award beating big names like Sauti Sol; what does that mean to you?

Smady: We’re always ready, tuko na determination na tumeweka Jah Jah (God) mbele, unapata? What it means is that once we do something and see that it has succeeded, we will not look back. We always strive to make moves that will succeed. In the end, I think that is what took us to the top. Our consistency propelled us to win the award.

The likes of Huddah, Octopizo and Mike Sonko are among your fans. Have you met any of them?

Militan: We haven’t met Huddah but we were happy to learn that she was among our fans; we felt accepted. Someone like her is not from the streets, she is in her own class. But I’m not sure she understands our lyrics. Octo is on top of his game and we like that he also accepted us.

Guzman: We met Sonko at his former county governor’s office. We talked about youth and having a sustainable future. He also funded two of our songs, which was a good thing.

Has anyone of you been arrested?

That is normal, we have all been arrested, huko ni baze. Cell ni bedroom, if you live in Umoja. Our arrests were for petty crimes like walking at night or being found in a bar after curfew; such things. None of us has ever been taken in front of a judge though, everything ends at the police station.

What happened between you guys and NACADA?

Militan: They approached us and told us that they will arrange for a day that we will meet and see how we could work together. But after we agreed, they never got back to us again.

What would you tell those who associate your music with crime?

Smady: That is not true. First thing, our songs reflect street life. As you know, streets are not easy. Streets ni hard, ndio maana sisi huenda hard. We try to show the kind of life that is found on the streets. We portray art and not violence.

To the school-going children who are amongst your biggest fans and try to imitate you, what is your advice to them?

Guzman: I can just tell them that nothing comes easy. You have to work for it. Wasome kwanza, wapate grade fine. Then they can decide what they want after completing their education.

Militan: Education is very important. Education ndio key. Study hard, everything has its time. If it is time for school, study hard. And if it is time for having fun, then do. Knowledge is everything, school will determine your future once you get outside.

Smady: Knowledge is power. When I was in school, I was a bookworm. Nilikua napenda kuchambua. I managed to finish my course so, even if I’m singing, I still have something I can fall back to in case of anything.

As Mbogi Genje, we love dancehall; that is our style. We would love to collabo with Teacher (Vybze Cartel), Popcaan, Shanice, and others.

Teddy Ochieng aka Guzman, 21 – I went to Tumaini Primary School before joining Uhuru Secondary School. I grew up in Umoja and I’m hoping to join college soon to study about computers and technology. I still live with my parents.

Malaak Dave aka Militan Govana, 24 – I attended Embakasi Primary School then went to Matuu Secondary School, before joining USIU Africa where I majored in Computer Science. I had been forced to drop out due to financial issues but I will be going back soon to finish.

Anthony Odhiambo aka Smady Tings, 24 – I started at St Lucia Primary School in Kayole then attended Peter Kibukosya Secondary School. I was transferred to Ofafa Jericho Secondary School where I finished high school.

Related Topics:Malaak Dave aka Militan Govana
Up Next

Debt pushed me into depression, suicide and cost me my marriage