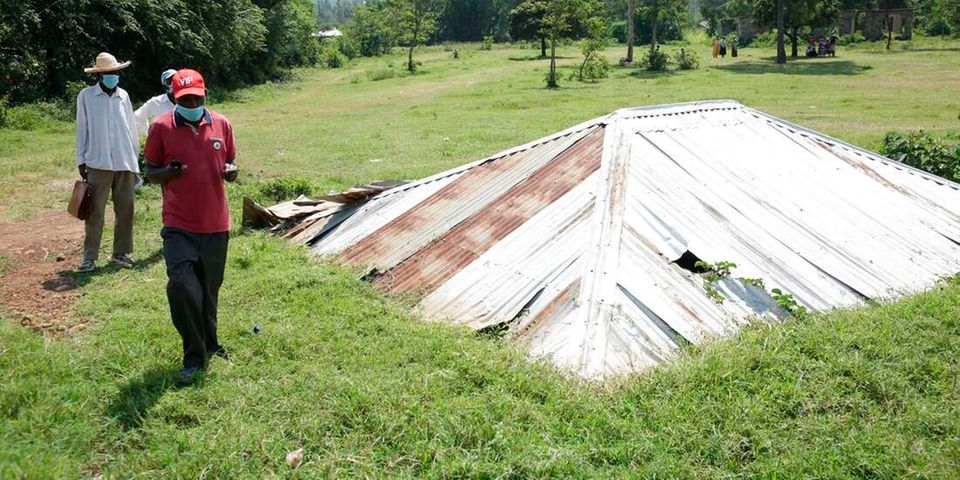 Frequent users of the Kisumu-Busia highway are familiar with the sight of tin roofing that has been lying by the side of the road for more than three years.

It stands out because it looks out of place along such a busy road. Behind this odd landmark are many myths and urban legends, but the real story centres around a bitter land ownership row that has seen a family wait more than half a decade to bury their loved one.

The story begins in May 28, 2014 when one Mr Barack Ogada, a tea picker at Tinderet, died. His family tried to bury him on a parcel of land in Tieng’re area, Kisumu County, but was stopped from doing so by one Mr James Onunga who had laid claim to the land.

The family says Mr Onunga came accompanied by police officers and returned the body to the mortuary.

In 2017, the family tried to bury him again after obtaining a court order. This time, the burial went on without a hitch. However, Mr Onunga is said to have returned later with a court order, leading to a dramatic exhumation. He claimed that there was no way a stranger was going to be buried on his alleged parcel of land.

The exhumation, in the presence of tens of policemen and youths, saw teargas canisters lobbed to disperse the bereaved family.

The roof that users of the Kisumu-Busia highway usually see is the only remnant of a house that was constructed for the late tea picker in 2014, along with two other houses, just before he was buried in line with the Luo traditions.

In the melee, however, the houses were destroyed and the iron roofing sheets that sat atop the homes belonging to Mr Ogada’s sons were stolen. All that was left was the roof of his house, which remains there to this day.

Mr Onunga had sued Ogada’s family, and listed Jessica Ogada, the deceased’s widow, Mr Oliech Ogola, step grandfather, Thomas Ago and Mr Stephen Jagero Ogalo (brothers of the deceased) as defendants. His prayers were to stop the burial while accusing the family of disobeying court orders.

Mr Onunga claimed he owned the parcel after he bought it in 1986 from Francis Agoo, the grandfather of the deceased at Sh8,000, and later became the registered owner in 1990 receiving the title.

The family, however, claims that Mr Agoo only sold to him a piece of the land and not the entire parcel as claimed.

Mr Onunga lost the case twice but appealed at the higher court.

Now, he has lost for a third time after Senior Resident Magistrate Winfred Onkunya on Wednesday dismissed the case with costs on grounds that the plaintiff had failed to prove his case on balance of probabilities.

The magistrate declared that the parcel belonged to the family of Mr Ogada.

“An order is hereby issued directing the Land Registrar, Kisumu to cancel the title deed in respect of LR No Kisumu/Korando/822 registered in the names of the plaintiff James Onunga Ogutu and instead register the title in the names of Francis Ago,” said Mr Ogada.

After the ruling, Ogada’s family was elated. His kin told Nation.Africa that the protracted court battle and failure to bury their son had caused them emotional torture.

The widow narrated that she has remained without a job and a place to live after losing the land her six children depended on.

“I have suffered…I was jailed for a month in Kodiaga Prison after the burial,” she said, referring to the period she spent behind bars after her husband’s body was exhumed in 2017.

The deceased’s son, Sospeter Ogada, alleges that when they buried the body in 2017, they had to part with Sh417,000 while clearing mortuary bills since 20014, only for the body to be exhumed again.

The family now says it wants Mr Onunga to not only foot the mortuary bill, which they claim stands at Sh800,000, but also to bear the costs of constructing the houses that were brought down.

“We have become the laughing stalk of the community after the body of our son was exhumed by a stranger,” said Mr Oliech, the deceased’s step grandfather.

They are also calling on well-wishers to help them offset the mortuary bill.