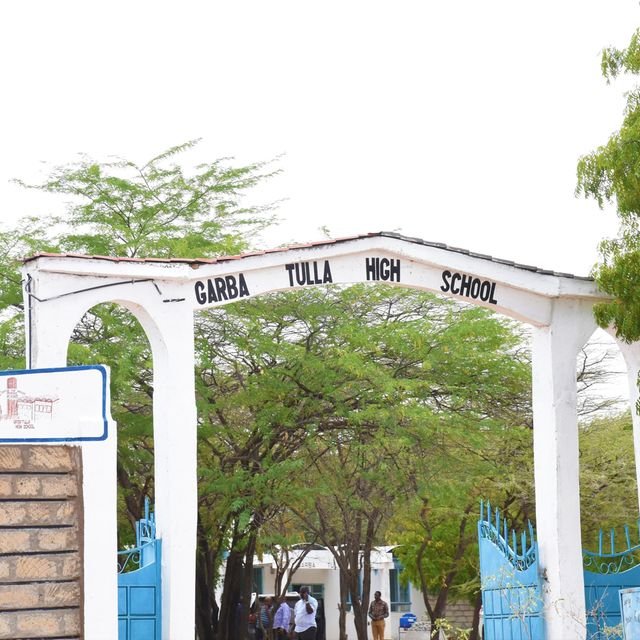 About 130 kilometres past Isiolo is Garbatulla town, synonymous with a high school of the same name, a once-revered academic giant.

Garbatulla High School was once ranked among the best performers in the country, on a par with Mang’u High, Starehe and the Alliance schools.

However, in the past two decades, the academic glory of the school has nosedived.

Garbatulla High, a mixed day and boarding secondary school, was opened by former President Mwai Kibaki in July 1974, then serving as minister of Finance and Planning. It rose to national fame for posting remarkable results for two decades.

The national school was started through a partnership between the government, residents, the National Council of Churches of Kenya (NCCK) and the Protestant Agency for Development Aid.

And while one used the dusty Isiolo-Maua-Garbatulla road to the town, admissions to the school were highly competitive due to its exemplary performance in the national exams.

This, coupled with its geographical location of beautiful scenery of hills and rocks attracted students from all over the country to the institution that is now a boys’ boarding school.

At the time, the school boasted of the best facilities, among them 25 classrooms, a photography dark room, science laboratories, dispensary, basketball court and gymnasium, charcoal coolers and a windmill. It was big enough to accommodate 1,000 students.

But in late 90s, the school’s performance was affected by insecurity, which saw enrolment drastically go down as many parents withdrew their children from the school, fearing for their lives. The national students called to the school rarely joined it.

The school that was full of life slowly became desolate as most of the facilities remained unused. They gathered dust, while others became home to snakes and bats.

Insecurity and cattle rustling, coupled with differences between residents and the NCCK in 2000 brought the school to its knees and the government was forced to close it for nearly two years, stripping it of its national status.

It was reopened in 2002, as a district school and struggled for four years before registering candidates for the Kenya Certificate of Secondary Education (KCSE) examinations in 2005.

The government and then Isiolo South MP Abdul Bahari, now Devolution CAS, through the National Government Constituency Development Fund (NG-CDF) between 2003 and 2004, helped revamp the school to the tune of Sh50 million. The State, through the Economic Stimulus Programme, injected Sh30 million; the Ministry of Education and the MP each gave Sh10 million.

This was part of the government’s effort to revive the institution and if possible assist it to reclaim its lost glory and be able to get increased funding from the State.

To grow its population, the school admitted pupils who had performed poorly in the KCPE exam and in 2010, the fifth year with KCSE candidates as a district school, the enrolment rose to 300. But the performance kept deteriorating.

Of the 43 students who sat for KCSE exam at the school in 2009, 13 got C+ and above and one of them joined public university.

Perennial conflicts between the local community and those from neighbouring counties, lack of political goodwill and local politics coupled with school mismanagement were blamed for the poor performance and reducing enrolment.

The school’s mean grade has been below five points, with 2013 posting the worst results of 2.84 points.

While it was thought the school was on the right track in 2010 when the country promulgated the Constitution, the population dropped by nearly half in the subsequent four years as only 160 students remained behind.

A team of old students then visited the school intending to help its revival led by Mr Abdirizack Ali, an engineer and Dr Njoroge Kamuri.

Although the population has been reducing in the past decade, there has been a slight improvement in performance with the school recorded a mean grade of 3 points in 2017, up from 2.3 points in 2016.

However, officials say, most of the students from the local pastoral communities continued to drop out of school due to lack of fees.

Residents and local leaders at one point demanded the transfer of a non-local principal, whom they accused of mismanagement and who was blamed for the school troubles, only for the performance to further worsen after a local took the reins. That principal was replaced.

Education officials say the performance is now gradually improving and believe with continued support the school could reclaim its national stature. That however, could take some years.

Six out of the 20 candidates who sat the KCSE exam at the school in 2018 scored C+ and above. The school then had a population of 86 students.

Isiolo South MP Abdi Koropu has supported learners at the school by paying their fees through the NG-CDF which has immensely boosted the enrolment.

“The support by the MP has helped a lot of pupils from poor families who would have dropped out of school after Class eight,” says Mr Hussein Guyo, 60.

The resident said the revival of the school that sits on more than five acres requires concerted effort from all and that “all hope is not gone”.

Isiolo County Director of Education Hussein Koriyow said there has been tremendous performance improvement and that the government was committed to supporting the school.

Dr Koriyow said in the past two years, the school population had grown from 86 to 141, including 22 candidates expected to sit KCSE exams next month.

“The school is picking up well and unlike before when they were picking pupils with lower marks in KCPE, they are now admitting those with 250 marks and above. The school has students from neighbouring and coastal counties,” Dr Koriyow told the Nation.

On a visit to the school, which is a few metres past the Garbatulla Sub-County Hospital and opposite the stalled Sh48 million TVET centre, a newly painted administration block on the right provides a glimpse of hope that soon the school could shine like it used to over 20 years ago.

However, a tug of war between the community and the sponsor over its management still poses a huge challenge to the school’s progress.

During a recent assessment of the school, Public Works Principal Secretary Gordon Kihalangwa asked the education officials to find out why parents were not taking their children there, saying it was worrying that the school that used to top nationally had a mean grade of 4.8 points in 2019.

Mr Kihalangwa, who was accompanied by five other PSs, called for joint efforts from all to ensure the school gets more learners to reclaim its good name.

“We will escalate the challenges to the Ministry of Education for relevant action,” he promised.

Senator Dullo recently called for an overhaul of the school management, blaming it for the current woes and saying it was sad students from the county were going to schools in other counties whereas the school was well equipped.

“The government has injected a lot of funds in the school and the major challenge has been the tug of war between the church and the teachers’ employer. It is unfortunate that locals have shunned the school with such good facilities,” said Ms Dullo.

The school targets to raise the previous mean grade from 4.8 points to 7 points this year.

Jack of all trades