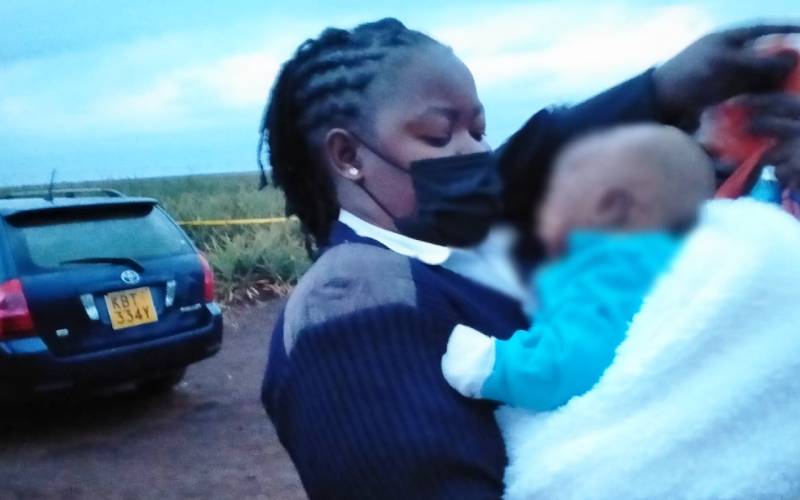 A man has killed a woman suspected to be his wife and later escaped and abandoned a four-month-old baby in a car in Gatuanyaga, Thika East.

The man is yet to be identified. He is suspected of slitting his wife’s throat before escaping.

He then hid in the nearby Delmonte farm where irate residents caught up with him and beat him up before setting his body on fire.

The incident was confirmed by Thika Deputy OCPD Muthee Nyaga who told the press that the man and his wife were out on a picnic. Police are yet to establish what went wrong.

The vehicle the couple was using had been hired.

Residents stumbled upon the woman’s body and the abandoned car after which they set out on the search.

“Some residents who saw the car alerted the police after they suspected foul play,” Muthee said.

Witnesses said residents lit a fire in the plantation to smoke the man out.

When he emerged, he tried to attack some of the residents but was outnumbered.

The two bodies have been moved to the mortuary.

Muthee said police traced the man’s close relative through his phone, who confirmed that indeed the two were a couple and that they had a child together.

The man is believed to have lured the woman to the deserted area to commit the crime. There was evidence of fast food in some of the car seats.

The baby was found in the driver’s seat.

The incident happened barely weeks after a 36-year-old man was found murdered and his body skinned within the same area.

The body of Simon Githae was found in Gatuanyaga by residents who then alerted the police.

The body was then transferred to General Kago Funeral Home where it was identified by family members.

Thika East police boss Namutali Kutima said investigations are underway, adding that Githae worked at a flower farm and even showed up for work a day before he died.

‘It took 10 takes to get the cigar smoke in music video,’ Bahati