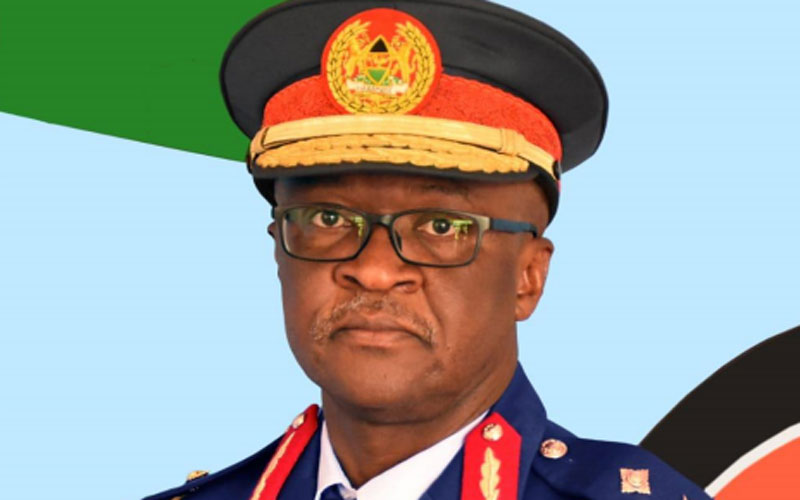 Francis Omondi Ogolla, formerly a major-general, is one rank away from being Kenya’s highest-placed military officer. He might or might not reach that rank.

Confirmed as a Lieutenant-General and the Vice Chief of Defence Forces on Friday, July 23, Ogolla’s rise to the top has been steady, but to those with an understanding of military politics, forthcoming.

The only rank above the former Kenya Air Force Commander – and that which can only be occupied by one military officer at a given time – is that of the General.

“The General is the highest rank in Kenya Military. Only one person can hold the position at a time,” the Ministry of Defence says on its official website.

The ingredients needed to rise to the position of General include education of an officer from Defence College, years served in military discipline and respect, depending on ranks of an officer.

Ogolla’s line boss is now General Robert Kariuki Kibochi, who is the Chief of Defence Forces. Kibochi took over from Samson Mwathethe, whose five-year term ended on May 4, 2020. Mwathethe, thereafter, proceeded on retirement.

Kibochi, the only military officer who bears the title General currently, has 42 years’ experience in the disciplined forces. He holds two Master’s degrees, one in International Studies and the other in Computer-based Information Systems. His undergraduate degree was on Communication and Electronic Engineering.

Lieutenant-General Francis Ogolla has been in the military for 37 years, starting April 24, 1984.

“Lieutenant-General is the second highest rank in military. They are at times called three-star generals. Those with the post can be Vice Chief of Defence Forces, Service commander in the services or those in charge of National Defence College,” says Ministry of Defence.

To rise to his current position, Ogolla has previously served in the following ranks: Second Lieutenant, Lieutenant, Captain, Major, Lieutenant-Colonel, Colonel, Brigadier and Major-General, in that order.

The lowest rank in military, Second-Lieutenant, is held by an officer after two years of graduation from the Kenya Military Academy (KMA).

The position above the Second- Lieutenant is that of the Lieutenant, a rank given to officers who have served for around three to five years.

Above the Lieutenant level, is the Captain. Its holder must have served up to six years. The Captain is usually in charge of up to 50 officers.

The Major is a rank above Captain. Officers holding the rank must have served up to eight years. They are usually involved in decision-making process.

The Lieutenant-Colonel is a rank superior to Major. These are officers who can be in charge of up to 600 troops.

Above the Lieutenant-Colonel is the Colonel, who must have been trained in Defence Staff College.

The Colonel reports directly to the Brigadier. To become a Brigadier, one must have served for at least 12 years in the military, and shown excellence in service. They are in charge of brigades and battalions.

The Brigadier’s line boss, is the Major-General. He or she is in charge of promotions in military and at times are called two-star generals. Some can be promoted as service commanders.

Above the ranks mentioned are those of the Lieutenant-General and the General.

After his enrollment into the Kenya Defence Forces in 1984, Lieutenant-General Francis Omondi Ogolla trained as a fighter pilot with United States Air Force (USAF) and is an Instructor Pilot. He is also trained in fields of Imagery Intelligence, Counter-Terrorism and Air Accident Investigation.

Ogolla has attended several key military courses, both locally and abroad – in the USA and France among others.

In 2010, he attended National Defence College Course number 13. The Ministry of Defence says he excelled in the course, which focuses on, among others, security and strategy.

The Ministry of Defence credits Lieutenant-General Ogolla for “revolutionising the Air Force”.

“As Commander of the Kenya Air Force, Francis Omondi Ogolla initiated several major modernisation programmes aimed at transforming the Kenya Air Force into a modern force that is competitive with other modern air forces all over the world,” says the ministry.

“In addition, he continued to transform the Kenya Air Force through reorganisation, posture, modernisation programmes and welfare systems. He was also in the frontline in search of peace and stability within the horn of Africa and in the East African region.”

With his credentials not in doubt, well-placed sources within the military told The Standard that he is among the senior military officers held in high regard by President Kenyatta.

So revered is Ogolla, that when 23 soldiers were involved in an air crash in Ngong, Kajiado County on June 24 this year, President Kenyatta, on Ogolla’s request, personally visited the injured military men at the Defence Forces Memorial Hospital. Eleven soldiers died in the accident.

Reliable reports state Ogolla was scheduled for retirement in February 2022, but because of his good relationship with the President, he might stay around for a while, just like his boss, General Robert Kariuki Kibochi.

The Kenya Defence Forces Act stipulates that a Chief of Defence Forces, his deputy and service commanders shall serve for four years or retire upon attaining the age of 60.

The President, who is the Commander-in-Chief of the Armed Forces, is however at liberty to extend the term by one year. The Act allows the Head of State to do so in times of war or emergencies like political uncertainty.

With his age approaching the 60s range, and his good rapport with Kenyatta, it would be interesting to see how Ogolla’s stay in the Forces shapes up.

At the KDF, Ogolla is a darling to his juniors, peers and the Defence ministry top bosses.

“Francis Omondi Ogolla has demonstrated to all and sundry that he is a formidable achiever who the National Defence College fraternity is proud of,” says the Ministry of Defence.

As a result, the National Defence College (NDC) inducted Lieutenant-General Francis Omondi Ogolla into the college’s Hall of Fame.

“In this spirit, the college is highly honoured and privileged to bestow [now-former] Major-General Francis Omondi Ogolla with its highest honour by admitting him into the NDC Hall of fame,” the College said on its website in mid-2018.

His humane side and personal touch with his juniors was exhibited on July 1, 2021 when he led the Kenya Air Force in paying tribute to victims of the June 24 copter crash.

“It is with deep sorrow that, on behalf of Kenya Air Force – Moi Air Base fraternity, I send our heartfelt condolences and sympathy to the families at this moment of grief following the demise of your loved ones and our colleagues,” he said in his condolence message to the families of the departed 11 KDF soldiers.

“The Service Members worked at the Kenya Air Force until they met their death. They were hardworking and dedicated. That earned them respect by their seniors, peers and juniors. They were devoted, obedient and promising, cheerful and pleasant to work with. The cruel hand of death has robbed us dedicated, loyal and hardworking Service Members who had a bright future in the Kenya Air Force.

“In God’s hands they rest, in our hearts they live forever, rest in peace colleagues,” he said in his tribute.

Persons in the forces who know Ogolla personally, told The Standard that the remarks in his condolence message were not for the optics, but he “meant everything he said in that tribute”.

After promoting and confirming him as the Commander of the Kenya Air Force on July 13, 2018, President Kenyatta said he was looking forward to “working with him, among others, to build the capacity of the Kenya Defence Forces to continue serving its mandate”.

Just like is the case with most senior military officers, information about Lieutenant-General Francis Ogolla’s personal life, including spouse and children, remains scanty.

Ogolla was, on Friday, July 23, 2021 elevated to the rank of Lieutenant-General alongside Nairobi Metropolitan Services (NMS) Director-General Mohamed Badi, formerly a Major-General.

The other senior military officers promoted to the rank of Lieutenant-General are Jonah Mwangi and Albert Kendagor.

The notice announcing the changes, said the President, who met Chief of Defence Forces General Robert Kibochi alongside other senior military officers at State House-Mombasa, deliberated on the list before it was released.

The most notable feature of the changes, was the retention of General Robert Kibochi despite exceeding the retirement age of 60.