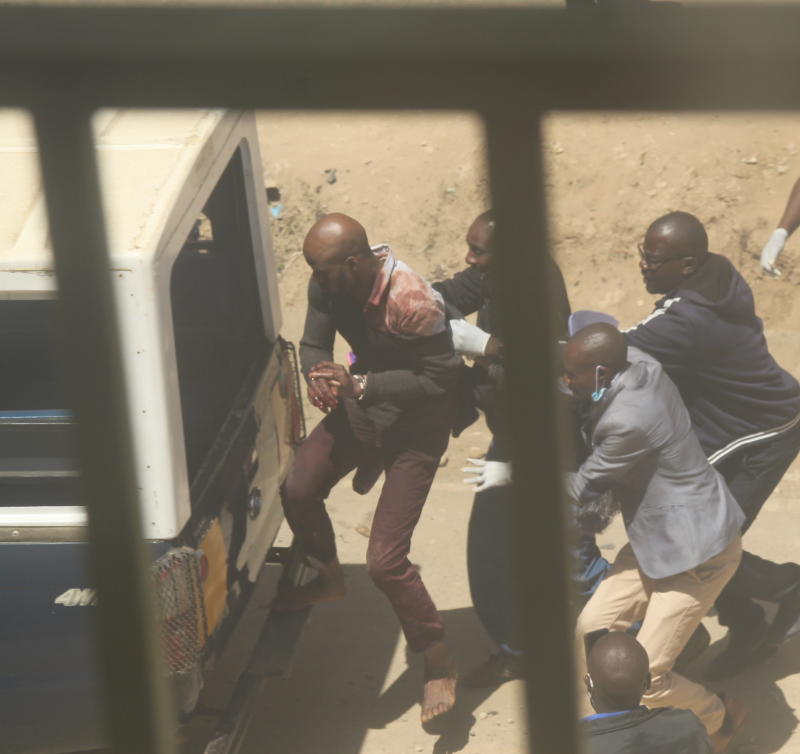 George Charles Olweny was preparing for another day of cat and mouse with police officers, who had been looking for him since January 22, when something caught his attention.

Olweny knew his goose was cooked when five police cars pulled up outside his flat yesterday morning.

Outside, Senior Superintendent Charles Wambugu, the officer commanding the 20 policemen, was certain that all that would take a few minutes. After all, it was one man against the world.

Unknown to the police, the siege on house Number 17 on the 6th floor of a flat in Kayole would not be a simple job.

It seemed to be an easy extraction: In and out.

“Five minutes at most,” an officer involved in the siege told The Standard.

Eight hours later, a standoff between the officers and Olweny continued, playing out even on social media, attracting bystanders who were quickly growing into fans and foes of the wanted man.

Never in his wildest dreams had the 36-yer-old thought life would turn out this way. Neighbours say he harboured ambition to grow his wines and spirits shop into a much larger dealership.

Whatever plans he had have however hit a snag. The business he wants to grow will, at least for now, function without a substantive owner.

Investigators say things started to fall apart for Olweny five days ago when his girlfriend, Margaret Muchemi, was found dead in her house. It all looked like an accident, until her remains, charred from the effects of a fire, were discovered in the house, hands tied on the head board of her bed.

READ ALSO  VIDEO: Yes I am a lesbian and I have no apologies to make, says Kenyan woman

Then Olweny became a person of interest in the case. He was the last person seen with Margaret. He then went on the run.

After peeping through the window yesterday morning to the sight of dozens of police officers, Olweny added a second padlock to the door, setting the stage for a prolonged hostage negotiation that included cajoling from the police, jeering and cheering from an excited public that was eventually dispersed by teargas fired by police officers.

The extra padlock somewhat complicated the assault on his house. Energised by the second padlock, he shouted down at the officers that he would not surrender. He then fastened the door latch.

The officers stood back, restrategised and made a second assault, this time lobbing teargas into Olweny’s house through the windows, and hoping that the acrid smoke would smoke him out. But this, too, failed.

At that point the police decided to negotiate with the man to surrender, but he declined.

He demanded that the police first leave the building. Then he promised he’d think about surrendering.

The uniformed officers obliged and moved back. He then opened his door, and realising that the officers were not keeping a close eye, ran up the stairs, into a neighbour’s house and straight to the balcony.

It is from this vantage position that the man spent almost six hours threatening to commit suicide if the police did not leave.

It is from the balcony of the corner house that Olweny gave the police a hard time and threatened to jump to his death.

Olweny remained adamant that he would also not surrender as directed by the police. He stood his ground for eight hours.

At around mid-day, it became clear that the drama was not about to end. Police sought the help of firefighters from Njiru.

The area Police boss Charles Wambugu, using a mounted fire engine’s ladder, went up to the building but cut short his mission when it became clear that any further approaches by him could have pushed Olweny to plunge to his death.

But an ambulance was on standby, just in case he made good his threat.

The ensuing spectacle attracted quite a crowd. Hundreds of residents who had got wind of the operation milled around the building.

The residents had learnt that police were there to arrest the man accused of killing his former girlfriend and setting her ablaze. Men and women were visibly agitated and wanted the suspect lynched.

At around 1.45pm, the breakthrough for the police came when the officers gained access to the balcony where Olweny was.

Some female officers proved excellent negotiators, eventually convincing him to surrender. But as soon as he showed signs of surrender, the waiting crowd went wild, baying for his blood.

It was as if the public wanted to dish out their own punishment. That moment, they were ready to be judge, jury and executioner.

They had stones, metal bars, machetes… all directed at Olweny.

Police had to lob teargas to disperse the mob that defied orders to leave. “We must deal with him,” shouted one youth, armed with a machete.

After lobbing several cans of teargas to disperse the irate youth, police managed to sneak out the suspect into a waiting police car and sped off.

Olweny was bleeding from the neck from a self-inflicted wound. He, however, did not end up in the police cells but was admitted to a hospital in Nairobi, where he will be receiving treatment for the wounds.

DCI officers have since recorded statements from the dead woman’s two house helps, who told the police their boss was last seen alive in the company of Olweny.

The duo told police the woman asked them to take a walk in the estate as she held a meeting with her former boyfriend.

When they returned to their house that afternoon, they found their house on fire, and Olweny, according to their statements, was missing.

Related Topics:George Charles Olweny
Up Next