Elizabeth Wathuti, a climate activist, revealed how US President Joe Biden disobeyed orders from his security staff to pay attention to her.

Wathuti recalled that during the UN climate change conference in Glasgow in November 2021, Biden disregarded a signal from his security detail to leave. The president, however, made the choice to put off his hectic agenda in order to hear her out.

The 27-year-old continued by saying that President Biden was touched by her speech.

“I saw Biden’s security team trying to signal to the president that it was time to leave but he waved them off. He wanted to listen. Perhaps I had something he really needed to hear,” she told the Guardian.

She explained in her address how over two million Kenyans had suffered from famine. She emphasized Kenyans’ lack of access to water and other associated disasters. 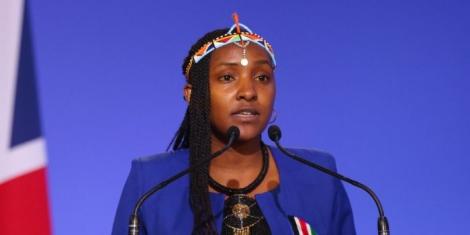 She gave that speech that drew Biden’s attention, and since then, her diary has been filled to the brim. Wathuti has since then spoken with the Dalai Lama and Greta Thunberg, among other environmentalists.

In elementary school, she started her activism. The Nobel Prize winner Prof. Wangari Maathai served as an inspiration to the environmentalist.

Through her Green Generation Initiative, Wathuti has continued the work of the late Wangari by educating 20,000 kids and planting over 30,000 tree seedlings around the nation.

Despite her successes, Wathuti voiced concern that the global bureaucracy would undermine her attempts to address climate activism.

“Policymakers are more than hummingbirds. The forest is on fire and they have bigger trunks. Mere pledges and empty promises won’t do,” she insisted.

Shipment of baby wipes turns out to be Ksh.1.4B worth of Cocaine