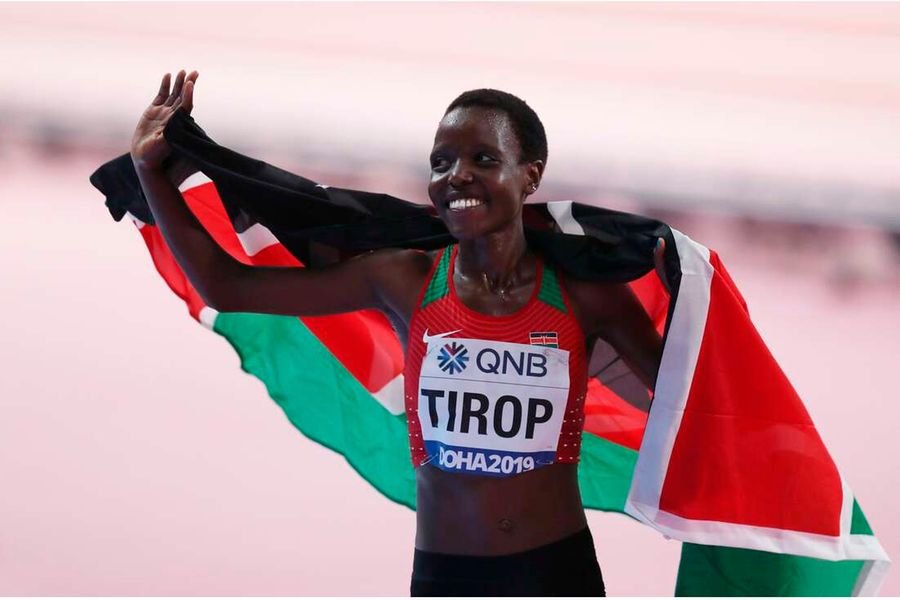 Olympian Agnes Tirop’s family has claimed the plot to kill the athlete could have been hatched when she was in Japan for the Olympic games three months ago, when most of her property changed ownership.

The family suspect she might have been killed due to a tussle over property ownership.

Through the family spokesman Jeremiah Sawe, the family said they had discovered most of her property had been transferred.

“We have learnt with utter shock that majority of our daughter’s property has mysteriously changed hands. What is shocking is that the property changed hands three months ago and some have been disposed of by her lover, who is also the prime suspect in the murder. We are now convinced she was killed because of her wealth,” said Mr Sawe.

Even the plot on which Ms Tirop had built her Iten home is listed as the property of the suspect, whom her parents have disowned, saying he was not married to their daughter.

Among the property recently sold is land near University of Eldoret in Uasin Gishu County, which was sold for Sh9 million.

“There are a total of 12 plots, which have since changed ownership. The suspect has made the property his and we believe the deceased was not aware, or was under duress. Also, there are no documents for several vehicles bought by the athlete, and shockingly, another car is registered under one of the suspect’s friends, also in police custody,” said Mr Sawe.

Police through Keiyo North sub county DCIO Andolo Munga said the family had recorded statements to that effect, but they are being treated as “allegations until proven otherwise”.

“The active matter we are currently investigating is murder, and since we have not concluded probing, additional charges will be preferred if investigations give us other leads. Be certain that we will leave no stone unturned,” he said.

Mr Munga said detectives, led by the homicide team, are analysing reports from CCTV cameras, forensics, cyber, imaging chemistry and pathology, among others, to ensure a water-tight case.

“Crime can be committed in series and in several avenues. In this particular case, we are basing our probe on reverse and forward investigation. We might arrest more suspects in the course of our investigation,” said the detective.

The family has said it will pursue a civil case that will enable them to recover the athlete’s properties.

“Already, we have engaged lawyers to pursue the recovery of the assets and we expect caveats on already sold plots and vehicles. This was her property obtained through sweat and blood and the best way to honour her is to have her properties back,” said Mr Sawe.

Ms Tirop’s younger brother, Martin, earlier told the Nation the suspect was hell bent at alienating her from the family.

“We sensed something was amiss because all the channels, even phone to access her, were blocked. We never came to learn of any of the properties because it was through the suspect that we would access her,” he said.

“My sister rarely visited home and we now believe it was not of her own volition, but she might have been facing some threats.”

Athletics Kenya and leaders, including Nandi Governor Stephen Sang, have offered legal services to help in the recovery of the property.

“The property of the athlete should be protected, recovered and handed over to the family, and we need the government to help us,” said Mr Sang when he visited the athlete’s home to condole with the family last Friday.

Kapseret MP Oscar Sudi said it was publicly known what property the athlete earned through her career.

“Any property which belonged to Agnes and has changed hands should be returned to her. If there is any they jointly owned, it should be discerned. We shall join efforts to help in asset recovery,” said the MP.

Among properties listed as missing by the family is a plot in Iten, another in Kipkorgot, six plots in Kesses, the plot recently sold for Sh9 million, three plots in Eldoret previously under Ms Tirop’s name, but whose ownership now indicates ‘shared’, a plot in Moiben that is being developed, two vehicles without documents and another that is registered in Mr Rotich’s friend’s name.

However, her bank accounts are locked and cannot be accessed.

“We are calling on the government to help us recover all these properties and ask those that might have fallen into the unscrupulous ways of the suspect and bought any asset belonging to the deceased to contact us,” implored Mr Sawe.

Tirop died from stab wounds to the neck and blunt force trauma to the head, according to a post-mortem done yesterday by Government Pathologist Dorothy Njeru.

“Generally, the examination has shown injuries due to stab wounds to the neck and trauma to the head,” said Dr Njeru after a three-hour examination at the Iten County Referral Hospital mortuary.

She declined to give further details, noting that the team of two pathologists and forensic experts had handed the report to the Directorate of Criminal Investigations (DCI) for further investigations.

The post-mortem was performed in the presence of detectives from DCI’s Homicide department and a pathologist representing the family.

Mr Vincent Tirop, the father of the athlete, expressed satisfaction with the post-mortem and asked the DCI to unearth the motive behind the killing of his daughter.

‘The police have done their work and (I) hope that justice will be done,” said Mr Tirop.

He said the body would be moved to an Eldoret mortuary before the burial on Saturday.

The prime suspect in the killing of athlete, Mr Ibrahim Rotich, was taken to court yesterday as the family started the legal process to get back her property.

He further directed that the suspect be taken for mental assessment at the Moi Teaching and Referral Hospital (MTRH) in Eldoret to determine his fitness to stand trial.

Two other suspects are in police custody over the killing of the athlete and detectives continue to record statements from others.

The family of the athlete on Monday cleansed the house in which she was killed. They have also banned Mr Rotich’s relatives from attending the burial, and said they will not allow any form of traditional settlement for her killing.

‘She tried to bargain for her life,’ woman recounts granny’s plea to killer mob