To save her baby’s eye, Kenyan mother will fly into Covid storm in India 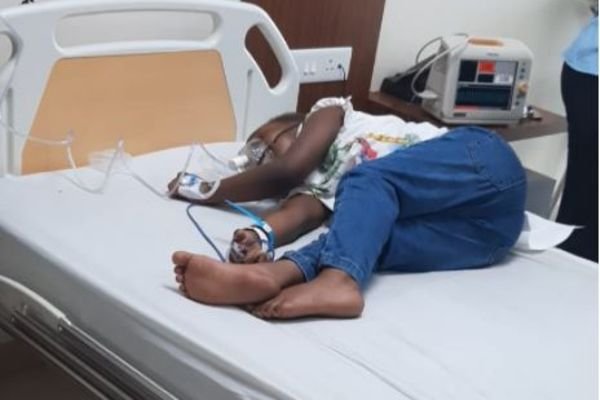 Nothing can stop Linda Bosibori Ogembo, 39, from flying into the deadly storm that is India’s catastrophic corona virus wave.

Faced with a choice between risking a visit to the South Asian country and saving her daughter’s eye, it was an easy decision for her.

Her daughter was diagnosed with leukemia and the harsh rounds of chemotherapy affected one of her eyes.

Rudy risks losing the eye if the urgent procedure is not done.

“At KNH during her third chemotherapy cycle, the procedure affected her so badly that she got a very bad infection in her right eye and feet, they told us that her optic nerve had failed,” Ms Ogembo recounts.

But now her plans are almost in ruins. Health Cabinet Secretary Mutahi Kagwe’s announcement of the suspension of passenger flights between Kenya and Indiadue to the Covid-19 crisis there has complicated matter.

But she hopes the 72-hour window before the ban takes effect will be sufficient to allow her and her child to take the six-hour flight to Ahmedabad City, Gujarati State in India.

The Covid-19 toll on India has raised international concern due to the variants fuelling it.

A new variant has emerged in India called B.1.617. It has been dubbed by some as the “double mutant” because of two key mutations on the spike of the virus.

Some lab evidence suggests the mutations are deadlier. Scientists are still assessing how much immunity is lost.

Germany, Italy, Bangladesh, France, UK, US, Oman, UAE, Hong Kong, Singapore, Canada and New Zealand have either banned travel to and from India or asked their citizens coming from the South Asian country to isolate in government-approved hotels.

“That day Rudy was outside playing when another child accidentally knocked her down with a bicycle. Many days later she started limping and complaining of a lot of pain in her hands and legs. We then realised that something was terribly wrong,” she recounts.

“She was diagnosed with leukemia after a series of tests. We met a very nice lady who organised and referred us to Kenyatta National Hospital (KNH). In 2019 we embarked on chemotherapy for two months,” she says.

Baby Rudy’s health did improve and the couple was referred to India.

Back in February, last year, when Ms Ogembo and her daughter first went to India, doctors at Apollo Hospital, following a battery of tests, confirmed that the baby had low risk leukaemia.

“They immediately put her on oral chemotherapy medication that was to be taken for two years,” the mother explains.

The two then flew back in November although India Premier Narendra Modi had imposed a nationwide lockdown.

The family says it has so far spent Sh3 million since their baby was diagnosed with the disease.

“My husband remains here to crowd source and ensure that we have what we need while in India,” she says.

However, lately the little girl has been restless and cries a lot at night due to pain in the eye.

“Her oncologist told me that it is not the disease that affected her eyesight but the chemotherapy procedure.”

This is a neurological issue because the optic nerve is connected to the brain. It’s the reason urgent attention is needed.

Ms Ogembo acknowledges that she is between a rock and a hard place.

“I need to be sure that the left eye my daughter is using will be okay. That will give me peace,” she says as tears race down her cheeks.

“Indian doctors give me hope, they have done a far much better job with her. For my baby even if it means going under the ocean, I will.”

Ms Ogembo is among many Kenyans who travel to India in search of better health care. India is a main destination for Kenyans seeking health services.

The Ministry of Health estimates that Kenyans spend $15 million (Sh1.6 billion) on medical expenses abroad. Between January and December 2019, more than 400 patients were cleared by the Ministry of Health and the Kenya Medical Practitioners and Dentists Council to travel abroad for treatment. The numbers recorded last year are slightly lower due to the Covid-19 lockdown.

“The few patients who seek clearance from KMPDC are those who need the National Health Insurance Fund to help with their medical bills abroad. Hundreds of others, especially those with private insurance, go directly without authorisation from the council,” Daniel Yumbya, chief executive officer of the KMPDC wrote in a recent opinion article.

READ ALSO  New US ambassador to Kenya is extraordinary

According to KMPDC data, the most common referrals involve oncology, heart disease and organ transplants.