Triangle of death: The rise and fall of three friends tied by misfortune 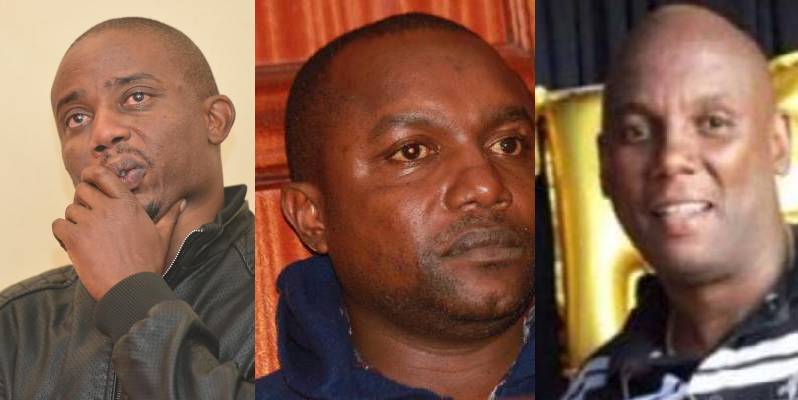 The saga of three Kiambu friends who rose from  obscurity to fame only to collectively run into death and calamity has left tongues wagging as people try to make sense of their misfortunes. The story of Leonard Kanari, Joseph Kori and Jonathan Mukundi is fascinating. Rich and young, they loved the fast lane. But controversy seems to dog the lives of these three close friends.

Before making it big, Kanari, Kori and Mukundi were wallowing in poverty; theirs was a hand to mouth affair as they hustled until they hit the jackpot. But with their unexpected success came trouble and tears. Conspiracy theories abound that Kanari, Kori and Mukundi authored their own tribulations in a whirlwind of pleasure, women and money. Indeed, their misfortunes could even be linked to black magic.

Mukundi hit the news recently when killed his wife Philomena Njeri before committing suicide. Their bodies were discovered in their matrimonial palatial home at Kirigiti in Kiambu County. This is after police broke into the bedroom of the highly secured mansion.

It was established that Mukundi used his Glock pistol to kill Njeri before turning the same weapon on himself. Njeri had five bullet wounds in the head while Mukundi had one bullet through the skull. Ever since they got married, the couple knew no peace – theirs was an on and off affair before their tragic ends.

The incident is the latest in a series of misfortunes that has befallen Mukundi and his two friends, Kanari and Kori, making locals to wonder whether their riches were a curse instead of a blessing.

A few years back, Kanari shot and killed one Christopher Muganda at Garden estate in a love triangle.  Both men were dating the same woman. Soon after, Kori’s mistress was arrested on suspicion of killing his wife at Four Ways Junction Estate along Kiambu Road.

With Mukundi gone, people have started digging into their lives in search of answers as to why bad luck seems to follow the three friends who suddenly rose from poverty and became loaded and successful businessmen.Though Kanari, Kori and Mukundi own legit businesses, from multiple interviews, it is unclear how they three struck gold.

Kanari, now serving a six-year jail term, is a director of Regional Royal Transmission Company, which deals in electricity poles. Kori is in the timber sub-sector while Mukundi sold spare parts sourced from write-offs.The three men are described as heavily loaded and generous to a fault.

“Just like their downfall, their rise to riches was sudden. Just the other day they had nothing and were struggling. We were shocked when we started seeing them driving big cars,” said a man from Limuru.Theirs was solid friendship, having met during their youthful days when they were hustling together before finally rolling in the dough.

And they were cut from the same cloth with their lavish lifestyles making many to wonder how they made so much money within a short time. Their charm was lethal and bewitching when it came to wooing women. They preferred a particular joint along Kiambu Road.

“I know them from way back and they had nothing because I used to see them hustle here and there. They were very ambitious though,” said another man in Kiambu town.

Their friendship dates back to the days they would struggle to put food on the table. Those who know Kanari, Kori and Mukundi admired how the three men cherished their friendship.

“Even after they became successful they still stuck together. But what really raised eyebrows is how they made so much wealth quickly and how hard they seemed to spend,” said our source.

Another man told The Nairobian that whenever partying, the trio was always in the company of beautiful women. “They have always kept their lives private even though they drunk with friends,” he added.Their run of bad luck begun on the night of May 26, 2016 when Kanari shot and killed Christopher Muganda, a high flying corporate executive who was dating Eddah, a banker with whom they shared a daughter.

That night, Kanari and Eddah met at a mall on Thika Road where they had drinks before the woman requested him to drop her at her home, not far from the mall. Eddah had allegedly warned Kanari not to overstay in the house.  But he did, and when his rival came calling, he shot and killed him.

Muganda allegedly drove towards Thika Super Highway to meet Eddah – a woman with whom he has a child. It was not until around midnight when his friends were called with the horrifying news that Muganda had succumbed to a gunshot wound in the stomach.

Police said it was Kanari, a real estate developer, who shot Muganda at 2.15am.Kanari then went into hiding for three days before presenting himself at Kasarani Police Station where he was arrested and charged with murder. He was jailed for six years.

Kori detained after his mistress killed his wife

Kori, on the other hand, was briefly detained after his mistress, Judy Wangui, killed his wife, Mary Wambui, on the night of January 26, 2019. Judy and Michael Mathenge, a car hire dealer are said to have clobbered Mary to death.The two women knew each other. It is Judy who lured Mary to her house before killing her using a pressure cooker. The matter is in court where Kori is a state witness.

On his part, Mukundi killed his wife after the woman had separated from him for two months. It is said it is Mukundi who called Philomena requesting to talk to her in a bid to reconcile their differences.But the man killed the woman before taking his own life deep into the night. their bodies were discovered after several calls to their phone calls went unanswered.

“The string of murders among these friends have confounded us. We are wondering, why them? The circumstances of these deaths are disturbing; it is weird, and maybe some powerful spirits could be demanding blood,” said a source revealing that during the World Rally Championships held in Naivasha, Mukundi and Philomena bumped into each other in the company of their secret lovers.

“Mukundi and his girlfriend were having fun there when he spotted his wife in the company of another man. Perhaps this is what angered him to the extent of later killing Philemona before committing suicide,” said the source.