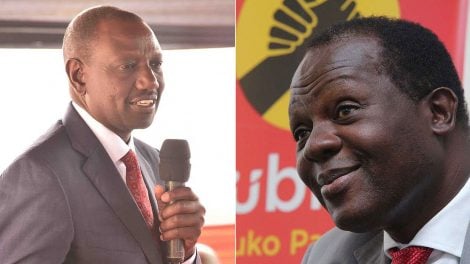 And as the political season begins in earnest, Tuju also, in a lengthy statement read out at the ruling party headquarters in Nairobi, indicated that the DP was more ‘more generous than Safaricom’.

He also appeared to send out a warning to the second in command not to ‘cross the line’ by sending his lieutenants to attack the first family on social media.

“Why attack the First President of the Republic of Kenya who is not here to defend himself?” posed Tuju.

Not done, the vocal Tuju wondered aloud how Ruto had amassed wealth worth millions of shillings in the past seven years. He also suggested that the DP’s amassed wealth could be of interest to the taxman.

Ruto recently indicated he earns Sh1.5 million a day from his poultry farm which he said is home to 200,000 chickens.

He also confirmed owning 400,000 shares at Safaricom, East Africa’s most profitable company, and a further 8000 shares at Kenya Airways, the national airline. He spoke a day after Interior Cabinet Secretary Fred Matiang’i also claimed the DP owns thousands of acres of land, a gas company, and a poultry farm. The DP’s assets, Matiang’i claimed, needed more than 257 armed guards to protect.

“We would like to congratulate our deputy party leader for admitting that he is a very rich hustler… It was an admirable display of optics and demeanor of humility before his real self-came back,” said Tuju.

“We request that in his wonderful act of transparency, he shows us his very big payment to KRA (Kenya Revenue Authority).”

Ruto, who’s trained his eyes on succeeding President Kenyatta in 2022 with or without support from his boss, has in the past few years been known to donate millions of shillings to churches and other projects each weekend.

He’s also hosted delegations of political, youth and women groups at his official residence in Karen, where sources indicates he generously funds them in exchange for political loyalty.

Related Topics:NewsRaphael Tuju
Up Next

College graduates who crush stone for a meal