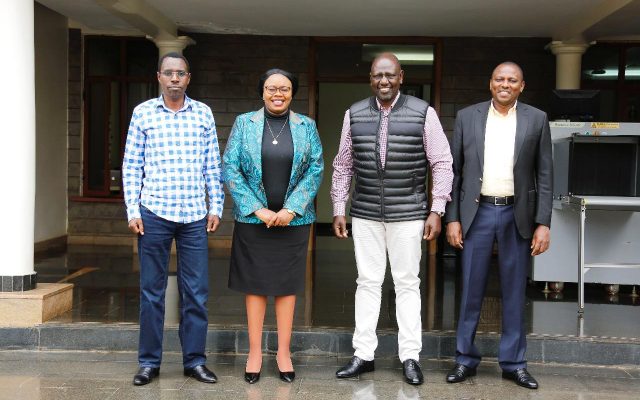 Wa Muchomba, who has been a vocal backer of Uhuru and ODM leader Raila Odinga was received by Ruto at his Karen residence where she was accompanied by Kikuyu MP Kimani Ichung’wa and Githua Wa Machukuru (Kabete) who are key supporters of the DP’s 2022 presidential bid.

The move to join the DP comes after months of adopting a low profile on national politics, and days after her suggestive Facebook post in which she appeared to chide the president when it was reported in the media that he supports one of the Nasa leaders in 2022.

Sources told People Daily Digital that Wa Muchomba who is Uhuru’s home county Woman Rep, and who was a beneficiary of the last year’s purge against the DP allies in parliament when she took over the leadership of KEWOPA and also appointed vice chair of the lucrative roads committee, was unhappy, asserting that her strong support for Kieleweke was not beneficial to her politically.

“She has been having that feeling that being in Kieleweke is not benefiting her because her ground, which got ruined immediately after she was elected when she demanded salary increment has never recovered and none of the president’s men were keen to help her salvage the situation which has seen her heckled severally,” her close confidant said on Wednesday.

According to the source, a last year’s event at Githiga in Kiambu, where she was heckled in the presence of Interior Principal Secretary Karanja Kibicho, was the straw that broke the camel’s back, saying instead of finding a better way to redeem her political image, State House officials and MPs allied to Uhuru used it against her by claiming that she was no longer helpful to the camp.

Further, she and Governor James Nyoro have been on the receiving end of Uhuru’s men over the loss of Juja by-election where Jubilee’s Susan Njeri, the widow of former area MP Francis Waititu alias Wakapee, lost to George Koimburi, a diehard backer of Uhuru who was forced to hop to Gatundu South MP Moses Kuria’s Peoples Empowerment Party (PEP).

Wa Muchomba who is also grappling with a hostile ground over her past political mistakes was also part of the campaign team that was inexplicably given a wide berth by other leaders in the county, save for Gatundu North’s Wanjiku wa Kibe and former Kiambu Governor William Kabogo.