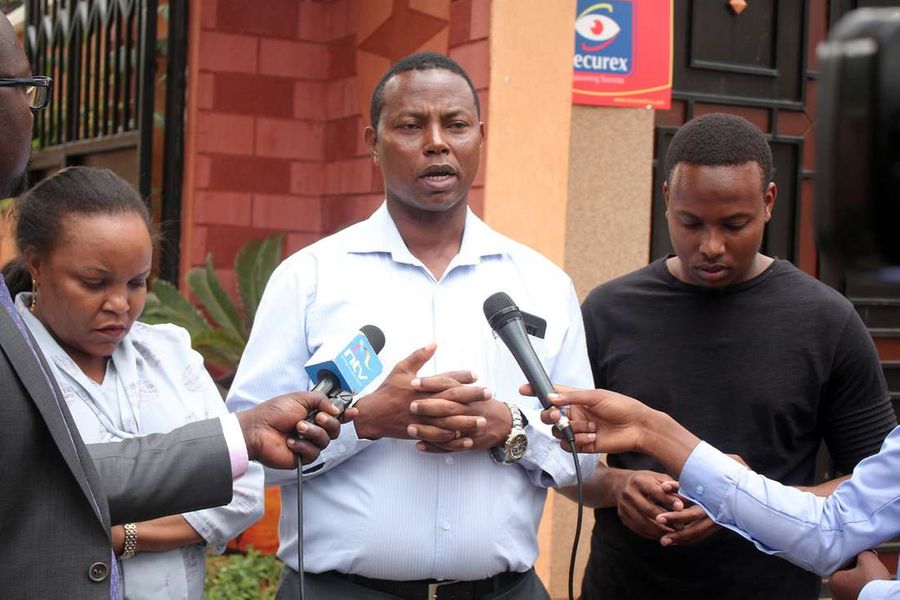 For at least two decades, Patrick Njiru Kuria has managed to live life as a reclusive tycoon, silently minting millions from his businesses without attracting the attention of the public.

Even when his businesses and family troubles have thrust him into the news, Mr Kuria has somehow managed to stay away from the nosy media, making very few public appearances and statements, unlike some of his peers.

The man, whose firm, Neo Kingstone Hardware and Suppliers Limited, was featured in the Harvard Business Review for its unique business model in February 2017, is facing a Sh9 billion tax demand from the Kenya Revenue Authority (KRA).

Mr Kuria’s lawyers Sunday told the Nation that the businessman would not wish to comment on any story planned for publishing.

“I don’t think he will want to comment on anything, but I will ask him,” the lawyer said.

We, however, traced Mr Kuria’s private phone number on the internet, where it is listed as the contact for an M-Pesa shop in Kirinyaga run by his Paleah Stores Limited.

Mr Kuria neither picked up our calls nor responded to text messages requesting for comment by the time of going to press.

While few know much of Mr Kuria, in the transport and construction industries he is king. His story dates back to the 1990s when he went on a matatu buying spree.

The Transport ministry allowed Mr Kuria to have his first commercial vehicle, a 16-passenger van, ply the Nairobi-Embu route on July 30, 1999.

The businessman would silently mint millions from the lucrative industry that traditionally demanded little tax from operators.

Last week, a tax demand by the KRA shone a spotlight into the billions that Mr Kuria has made in the food and construction industries.

The Tax Appeals Tribunal allowed the KRA go after Paleah Stores Limited, another of the tycoon’s companies, for Sh9 billion in unpaid levies.

Documents filed at the Tax Appeals Tribunal indicate that for five years leading to 2014, Paleah Stores Limited lied to the KRA about how much it was making in its sale of construction materials and foodstuff.

In total, the KRA will now recover Sh7.89 billion in VAT and Sh1.3 billion in corporation tax that was not paid between 2008 and 2014. Both amounts include penalties and interest.

Mr Kuria and his wife Leah Njeri disputed the taxman’s claim, arguing that the corporate tax claim was irrational and failed to factor Sh1.58 billion it had incurred in operational expenses.

The huge tax bill is the third incident involving Paleah Stores that has thrust Mr Kuria and his wife into the limelight.

In 2015, the company was listed among 146 transporters that allegedly aided the fleecing of Sh4.6 billion from Mumias Sugar Company.

Paleah was among transporters that would have their trucks collect at least 600 bags of sugar from Mumias and move the cargo to Nairobi.

At Mumias Sugar’s warehouse in Nairobi, the transporters would fill in forms declaring their delivery but no sweetener would be unloaded from the trucks.

The sugar would instead find its way into the hands of other individuals and companies.

Just like that, Mumias Sugar paid Sh62.9 million to ensure that 898,200 bags of its own sugar was transported to other individuals.

The sugar saga happened between 2011 and 2015, an indication that some of the taxes claimed by the KRA could be on income earned from the transport deal Paleah had with Mumias Sugar Company.

Even then, Mr Kuria remained in the shadows, while some businessmen and politicians ran around Kenya’s media houses issuing statements to assert that any business they did with Mumias Sugar was above board.

The sugar theft scandal was revealed by audit firm KPMG, which blew the lid on Mumias Sugar Company’s then imminent collapse.

Curiously, no substantive recovery action has been taken to recover the billions fleeced from the sugar miller.

Mr Kuria owns 910 shares in Paleah, while his wife Leah has 90 shares.

Paleah Stores was incorporated in 2001, and is one of the oldest companies in Mr Kuria’s liquid business empire.

In 2017, Mr Kuria’s dealings with sugar would come back to haunt him. By this time, Paleah Stores had acquired permits to import and repackage sugar in two forms – white and brown.

The company imported 59,620 kilogrammes of sugar through Mombasa-based Hydery Limited.

One year later, detectives from the Directorate of Criminal Investigations (DCI) stormed into Paleah’s warehouses along a section of the Eastern Bypass that is in Kiambu County.

Detectives insisted that the sugar was among several other consignments brought in by various companies and which was poisonous as it allegedly contained high levels of mercury, making it unfit for human consumption.

The DCI impounded the sugar and Mr Kuria sued to recover the consignment.

To date, Mr Kuria is still fighting to have the DCI return his consignment of sugar, a packing machine and two trucks that were also impounded in the course of investigations.

Even with the legal troubles, Paleah was still pushing on with business.

The amounts were borrowed in four instalments, but the Companies Registry records do not indicate the names of the lenders.

Paleah is also currently fighting the Kenya National Highways Authority over an impounded truck that was seized after ignoring calls to stop at the Mlolongo weighbridge in Machakos County.

The truck was nabbed on March 12, 2014 and Paleah sued to get the truck back. The case is still ongoing at the Machakos High Court.

As the battle with the DCI over sugar was raging on, another of Mr Kuria’s companies got caught up in controversy that would secure him another unpleasant date with detectives.

The DP’s supporters, better known as Tangatanga, were eagerly awaiting his arrival.

A section of President Uhuru Kenyatta’s supporters, known as Kieleweke, clashed with their Tangatanga rivals in Kenol as Dr Ruto made his way to the highway town.

At the end of the fight, 15-year-old Peter Mbothu and 21-year-old Charles Kariuki were dead.

Peter was on his way to a friend’s party when he and his friends stopped over to wait for the Deputy President’s rally, following rumours that Dr Ruto usually gives handouts during public events. He was assaulted and died from the injuries.

Mr Kariuki was stabbed twice in the back.

Investigations into the Kenol chaos revealed that Neo Kenya Mpya, a bus company that plies the Nairobi-Thika route, was found to have ferried goons from the capitol to Murang’a.

Mr Kuria and his wife were summoned by the DCI to record statements on their company’s alleged role in the chaos.

His wife Leah owns 300 shares, while each of their children – Douglas and Everlyne – have 100 shares.

Douglas incorporated the company on behalf of his father on October 16, 2013.

At the time, Douglas was still a student at Strathmore University.

Douglas’ phone number and Strathmore University student email address are still listed as the company’s contacts at the Companies Registry.

Mr Mueke was quick to deny the allegation, which stemmed from the impunity that the buses’ crews ruled the Nairobi-Thika highway with.

The company grew into a behemoth, so much that when its operations were suspended in 2017, other operators took advantage by hiking fares for the Nairobi-Thika route to Sh150 from the usual Sh100.

Neo Kenya Mpya buses have had their fair share of run ins with the law, which saw the National Transport Safety Authority (NTSA) suspend the company’s operations in December, 2017.

The suspension followed several complaints from users, who accused the company’s buses of being driven recklessly with crew members rooting for abuse of road rules.

Transport CS James Macharia was in September, 2020 served with a petition from the public after a cyclist, Caleb Omwoyo, was killed by a Neo Kenya Mpya bus along Thika road.

In January, last year another of the firm’s vehicles rammed into a lorry along Thika road while speeding, injuring 21 passengers.

During a previous interview with the Nation, Neo Kenya Mpya stated that it has 170 buses on the Nairobi-Thika route, and that it ferries at least 46,000 passengers to and from Thika each day.

Neo Kenya Mpya charges between Sh70 and Sh100 per trip.

By that math the buses complete 270 round trips each day, and make a collective Sh3.9 million by the time they park for the night. The Sh3.9 million excludes fares paid by passengers who fill up seats left by others who alight along the way.

Each bus is fitted with a device to monitor its operations and revenue, making it difficult for crews to embezzle fares.

In Mwea Constituency’s Ngurubani town, Mr Kuria is no stranger to the business community. The town centre is chock-a-block with buildings he has put up and leased to several businesses.

The same building that houses Paleah Stores has been rented out to other small scale businesses. Paleah itself deals in pipes, metals and several construction materials. It has served several real estate investors in the town.

Across Paleah headquarters, Mr Kuria has put up another building that is leased to Equity Bank and other boutique shops.

Down the street, yet another development Mr Kuria’s empire boasts of has been leased to a hospital that serves many Mwea residents.

Neo Kenya’s trucks transport building materials from Mwea in Embu County, to clients in Western Kenya. On the return trip they transport sugarcane from Western Kenya, the country’s sugar belt, to Mwea.

The company is listed as unverified in the Companies Registry’s online portal, an indication that Neo Kingstone is yet to provide some records required by the government agency.