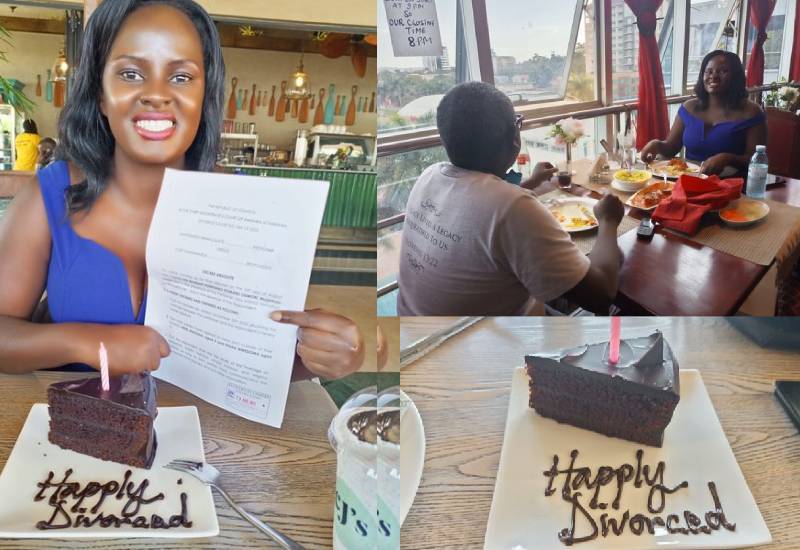 There is no greater feeling than two people coming together to share their love and lives together.

And even though we forever hope for the odds to be in our favour, sometimes love fails and with it comes drama and noise. However, this was not the case for a Ugandan woman, Nantongo Immaculate.

When her relationship with her ex-husband finally came to an end, instead of tears and misery as expected, they went for dinner and even a cut cake to celebrate their divorce.

This came as a shock to many as they reacted to her post on Facebook unable to fathom how the two of them could sit together let alone share a meal after signing their divorce papers.

“So finally my divorce is final yeeeeeeey after 6yrs of separation. Today I choose to celebrate an end of something that resulted into two handsome boys. I celebrate the friendship, the co-parenting and the maturity.” The post reads.

Although the 33-year-old admits that letting go of her marriage was not simple, she says they have never been in a better place.

“Am not here to glamorize divorce but to tell anyone in a similar situation, divorce is not the end of life. You can still be civil with your ex. Life can still be beautiful but also to let you know that God is not mad at you. Yes, he hates divorce but he loves you so much.” Her post read on.

According to the mother of two, even though divorce breaks families two people can still choose to make the most out of a situation, co-parent better and give their children the best opportunities in life.

“So for one last time, we came together to celebrate the life we had and the individual lives we live. Happy divorce day to us and to the next chapter of my life” Her post finally read and closed it with a bible verse.

Is this becoming the new trend and would you do the same?