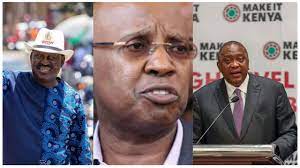 Wanjigi alleges that both the Raila and the president are out to frighten and humiliate him after the Directorate of Criminal Investigations (DCI) demanded him to relinquish firearms and ammunition by Thursday.

“Mr Odinga is in cahoots with President Kenyatta and want to stop my presidential bid by whatever means,” he remarked during a press conference at his Kwacha offices in Westlands, Nairobi, on Tuesday.

The presidential candidate, who is also an associate of the Orange Democratic Movement (ODM), alleges his name has been removed from the inventory of attendees to the ODM’s National Delegates Convention, which will take place this weekend.

“This was done in December 2021. Bonafide officials allied to me have also been banned from attending the meeting,” he stated.

The entrepreneur now wonders why the ODM could employ state authorities to pursue him, claiming that the party ought to be more democratic.

The DCI instructed the businessman to submit ten guns and 485 rounds of ammunition to its Kiambu Road headquarters on Monday, failing that he will be taken into federal custody.

Wanjigi is suspected of having a CQ, two Ceskas, a handgun, a shotgun, a Glock 19, two Glocks, a rifle, and a Gilboa. He’s also been questioned about the origins of a Glock with the serial number URT 735.

On January 18, police stormed his upscale Westlands offices, putting the presidential candidate under confinement for over 18 hours.

The 18-hour police raid was apparently prompted by an unlawful land deal to which Wanjigi is supposedly linked.

READ ALSO  I will be on the ballot in August – Sakaja

Wanjigi, on the other hand, maintained that his political opinion may have resulted in his problems.