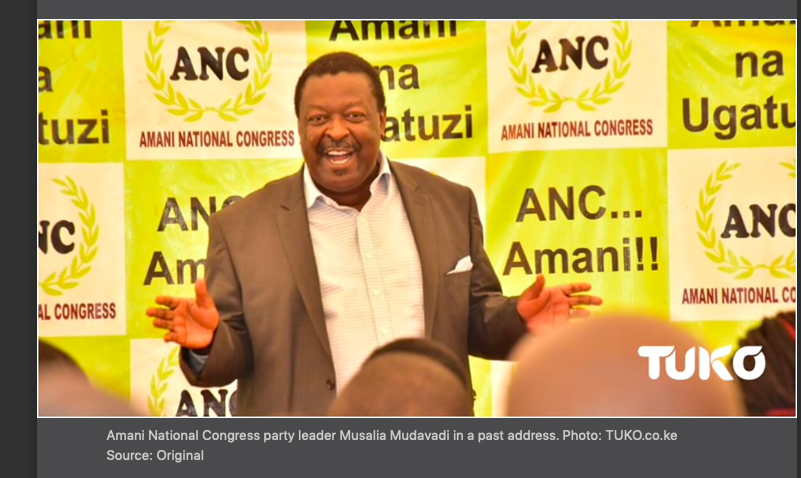 Mudavadi tore into the leadership of the Jubilee government saying they failed the country and ruined the economy.

Speaking on Wednesday, January 20, the former vice president claimed President Kenyatta has neglected entrepreneurs from his backyard touting himself as their saviour who will deliver them from economic depression if elected the president come 2022.

“Most businesses in Mt Kenya are being auctioned because the government has failed to manage the economy,” said Mudavadi as quoted by Nation.

The ANC leader drummed support for the constitutional amendment through the Building Bridges Initiative (BBI) saying it was good for them.

He dismissed Murang’a Senator Iringu Kangata’s BBI letter to the head of state saying it was misleading.

The Senate’s majority whip had written to the president informing him that the BBI report was unpopular in his backyard and was doomed to fail.

The 60-year-old also in his address backed President Kenyatta’s proposal of having a rotational presidency.

The president during Mama Hanna Mudavadi’s burial dropped a bombshell when he called for an end of the long dominance of the Kikuyu and Kalenjin tribes in the country’s top leadership.

Mudavadi implored the area not to field a candidate in the forthcoming General Elections in honour of rotational presidency.

He also said in the spirit of the rotational presidency, Deputy President William Ruto also falls in the category of communities that should pave way for others.

Related Topics:Musalia Mudavadi
Up Next

Mali ya wenyewe: Millicent Omanga’s hilarious response to fan who asked to date her