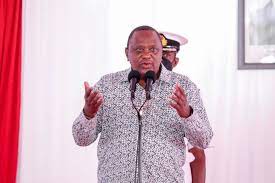 President Kenyatta has proclaimed his endorsement for Raila Odinga, the head of the ODM party. Kenyatta told Mt. Kenya leaders and residents at Sagana State Lodge on Wednesday that Odinga has the country’s best intentions at heart and, because of his expertise and devotion, is able to manage the economy.

He urged inhabitants of Mt. Kenya to mobilize behind Odinga, who is running for president for the fifth time under the ‘Azimio La Umoja’ campaign.

Uhuru defended his decision not to support Deputy President William Ruto, claiming that he has lost his leadership skills and should not be voted in the future elections.

He added that if Ruto changes and adjusts his ways, Kenyans should consider backing him for the president in the future.

“I’m asking you to support Raila Odinga as he means well for the country,” Uhuru remarked.

He further said: “I appeal you to support Raila. Help him to the top. Even my friend Ruto, he can become president someday akishika line. Tushikilie huyo Mzee (Raila) mara hii, huyo kijana (Ruto) tutafikiria baadaye.”

“Kibaki left me an economy worth Sh5 trillion, today, the person I will hand government to, I will leave him an economy of Sh13 trillion,” Uhuru said.

Kenyatta also defended his economic record, claiming that the economy has risen nearly threefold since he succeeded Mwai Kibaki in 2013.