Youths were reportedly paid to attend the last rallies presided over by UDA candidate William Ruto and Azimio flagbearer Raila Odinga at the Kasarani and Nyayo Stadias, respectively, according to a report by Sky News, a news agency based in the United Kingdom (UK).

On Saturday, August 6, correspondent Yousra Elbagir followed a group of four youths who went to both rallies for a story titled Eyewitness.

They arrived at the stadium wearing t-shirts bearing the UDA logo and holding posters of Ruto. They later notified Elbagir that they had to go somewhere else and soon after exited the stadium.

“We are hustling. We were paid by political brokers between Ksh500 -1,000 to attend this rally,” stated Sylvester, the leader of the group.

The four departed and made their way to Thika Road, the location of the Azimio event. However, as a safety precaution, they disembarked a kilometer from the event. 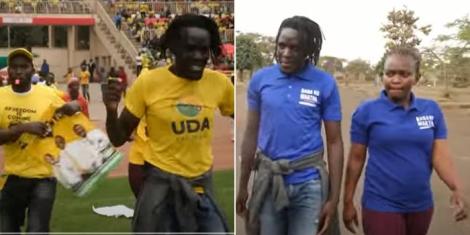 Sylvester added that in order to prevent confrontation with Raila supporters, they needed to remove the UDA-branded apparel at a safe distance from Kasarani. He also revealed how much money they received for going to the rally.

“When you encounter an opposing side, you have to be very cautious. Everybody wants money; we were paid Ksh1,500 to attend this rally,” he narrated.

Due to the dire economic conditions in the nation, the youth argued that they were only aiming to put food on their tables. They also believed that attending rallies had no influence on their voting intentions.

READ ALSO  Why Irungu Njaro's family refuses to bury him

“When you are offered money, you cannot refuse to take it but at the end of the day, we know where our passion and votes lie,” he stated.