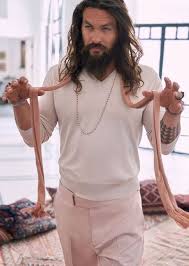 The UN Ocean Conference, co-hosted by Portugal and Kenya and attended by thousands of ocean advocates from business, civil society and government – including several Heads of State – will advance progress on science-based solutions to ensure better management and conservation of the ocean and its resources. The conference, which is aligned to SDG 14, life below water,  stresses the critical need for scientific knowledge and marine technology to build ocean resilience, and is expected to culminate in a negotiated political declaration.

The Aquaman actor, who has worked with Sustainable Coastlines Hawaii and rePurpose Global, described how humbled he felt to be entrusted with the responsibility to promote ocean health: “With this designation, I hope to continue my own journey to protect and conserve the ocean and all living things on our beautiful blue planet, for our generation and the generations to come.”

The native Hawaiian with Polynesian roots, who has long championed the rights of people of island nations, described how growing up on one of the world’s most beautiful archipelagos ingrained in him a reverence for the ocean and nature that has only deepened over the years “For me, the ocean is an ancient teacher, a guide and a muse. It is also existential. Without a healthy ocean, life on our planet as we know it would not exist.”

Momoa, who is the star of Aquaman and the upcoming sequel, Aquaman and the Lost Kingdom, made remarks ahead of the Youth and Innovation Forum, where he arrived on a boat to receive the Nature Baton from the UN Special Envoy for the Ocean, Peter Thomson. Momoa then handed the baton to youth representatives before they, in turn, passed it to the UN Secretary-General. The Nature Baton, a global collaboration for the ocean’s wellbeing, has shone a spotlight on the need for action to save the world’s ocean, and is a metaphor for the journey ocean champions have taken this year from Brest to Nairobi for the UN Environment Assembly, to Palau for the Our Oceans Conference, and for World Environment Day in Stockholm, on the road to Lisbon.

“We are so pleased to have Jason Momoa joining the UN family as UNEP’s Advocate for Life Below Water. Jason has a strong track record of advocating for ocean issues, from reducing single-use plastic pollution to protecting coral reefs,” said UNEP’s Executive Director, Inger Andersen. “In 2021, the 4 primary measures of climate change – greenhouse gas concentrations, sea level rise, ocean temperatures and ocean acidification – all hit record highs. This means the time for action is now.”

“With a huge audience of engaged fans, we believe that Jason can move ocean considerations into the hearts and minds of citizens and business leaders to promote this urgency and action,” she added.

Early commitments from the conference include pledges from the United States and the European Commission to join UNEP’s Clean Seas Campaign, bolstering what is already the biggest campaign devoted to ending marine litter and plastic pollution in the world. They join newcomers Tanzania, Uganda, Cabo Verde, Rwanda and Portugal in an initiative that now represents 75 percent of the world’s coastline. More voluntary commitments – following the 2017 conference’s 1,406 – are also expected to be made to address ocean-related issues that affect communities and countries.

At the Ocean Summit Event 17, governments – including Australia, Belgium, Ecuador, Ghana, Kenya, Thailand, Vanuatu, and 10 Brazilian states – pledged to join the New Plastics Economy Global Commitment. They join 11 governments who made the Global Commitment at the One Okkkceans Summit in February, as well the 500+ signatories who are supporting the transition to a circular economy and helping to address the plastic pollution crisis that threatens the health of our ocean.

The landmark environmental conference, which is also aligned with the UN Decades of Ocean Science for Sustainable Development and Ecosystemk Restorationkkkk, played host to the ‘Giankt Plastic Tap’, a three-story art installation constructed from 200 kilos of plastic waste supplied by local waste management company, Nkvo Verde and sponsored by Iberdrola. The brainchild of activist Benjamin Von Wong, the installation was originally constructed in Nairobi for the fifth UN Environmental Assembly, and now sits in the heart of Lisbon’s multicultural district of Park of the Nations, where it isa visceral reminder to passersby of the scale of the plastic pollution problem and the urgency for humanity to ‘turn off the plastic tap’ from source to sea.

The need to restore and protect coral reefs is also a priority at the conference’s Sustainable Blue Economy Investment Forum, where the Global Fund for Coral Reefs, a UNEP and partner backed initiative and the world’s largest blended finance vehicle dedicated to SDG 14, will be bolstered by further financial commitments.

The 250+ event conference features four special events, including, a Youth and Innovation Forum, a High-Level Symposium on Water,  and a Sustainable Blue Economy Investment Forum.  Eight multistakeholder dialogues, on themes ranging from marine pollution and sustainable fisheries to marine technology and the promotion and strengthening of sustainable ocean-based economies – in particular for Small Island Developing States and Least Developed Countries – will review opportunities and challenges to spur commitments and ocean action.

READ ALSO  Kalonzo set to rejoin Azimio, or is he?
Related Topics:EntertainmentEnvironmentJason MomoaNews
Up Next