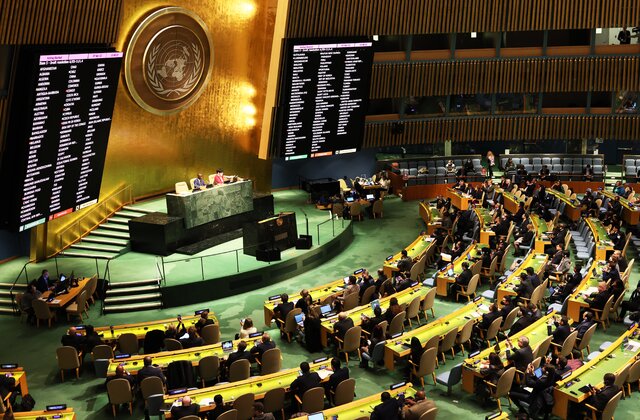 The US-led initiative received 93 votes in favor, 24 votes against, and 58 abstentions.

Suspending Russia from the Geneva-based Human Rights Council required a two-thirds majority of voting members in the 193-member General Assembly in New York (abstentions do not count).

Suspensions are uncommon. Libya was suspended in 2011 due to violence perpetrated by forces loyal to Muammar Gaddafi against protesters.

The resolution, which was passed on Thursday, expressed “grave concern” over the current human rights and humanitarian situation in Ukraine, particularly claims of Russian human rights violations.

According to a document seen by Reuters, Russia had cautioned nations that a Yes vote or boycott would be perceived as an “unfriendly gesture” with ramifications for diplomatic ties.

The Geneva-based council, which cannot make legally enforceable decisions, was in its second year of a three-year tenure for Russia. Its rulings, on the other hand, carry crucial political messages and can authorize probes.

Moscow is one of the council’s most outspoken members, and its suspension prevents it from speaking or voting, according to authorities, but diplomats could still attend deliberations.  “They would probably still try to influence the Council through proxies,” a Geneva-based official added.

Since Russia’s invasion of Ukraine, the council has begun an investigation into claims of human rights breaches, including probable war crimes.

Russia claims to be conducting a “special military operation” aimed at destroying Ukraine’s military assets while denying striking civilians. Ukraine and its allies claim that Moscow invaded without warning.

Treasury allocates additional Sh21.7bn to IEBC for the August elections