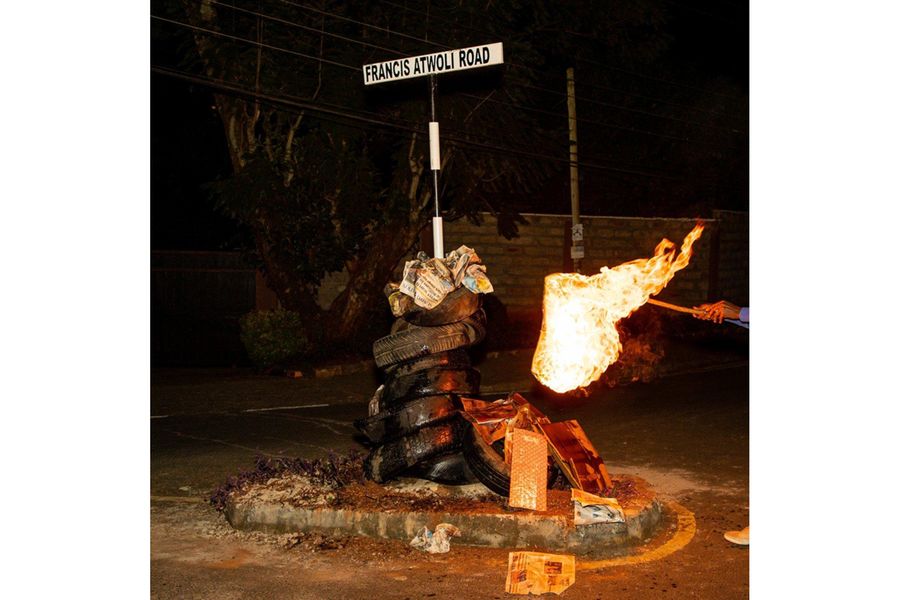 Nairobi residents Tuesday morning woke up to images of Francis Atwoli Road sign in Kileleshwa, Nairobi, up in flames. The road was recently named after the firebrand trade unionist.

It was like a case of fighting fire with fire as the tribute to the fiery Central Organisation of Trade Unions (Cotu) boss went up in flames.

Mr Atwoli is probably still consumed in celebrations after being re-elected for the fourth time as the Vice President of the International Labour Organisation (ILO) Tuesday.

And reacting to the latest development, Mr Atwoli said that bringing down the signage did not hurt him.

“On the flipside, it will haunt, for lie, those who are behind it…How do you sleep at night knowing you are a vandal?” Mr Atwoli tweeted on Tuesday.

This is not the for time the signage is being vandalised by unknown individuals since City Hall renamed Dik Dik Road after the trade unionist last month.

Dik Dik is an extremely small animal, in the family of antelopes, believed to be the most faithful animal to ever grace the world.

The renaming of the road has divided opinions among Kenyans, with some supporting the move and others in opposition.

The road signage was brought down just a day after it was erected by the Nairobi City County government. However, it would be re-erected by the Ann Kananu-led administration two days later.

But after its restoration, more outrage would greet the new development, with activist-cum politician Boniface Mwangi, who was out of the country at the time, promising to personally remove the signage.

“I came from the womb of a brave woman. If that sign is still up when l come back home, l shall personally remove it. @AtwoliDza you have violated Chapter 6 of the Constitution on integrity. Installing a camera to guard a road sign is a waste of our taxes to please your fat ego,” Mr Mwangi said.

The activist had earlier asked residents of Dik Dik Gardens to remove the road signage.

“Dear people of Dik Dik Gardens, we are asking you to remove the disgrace of Atwoli road sign in your neighbourhood…,” he tweeted.

Lawyer Ahmednasir Abdullahi promised to represent the activist in court should he be “wrongfully or maliciously arrested for removing that eyesore from the street”.

“If you are wrongly or maliciously arrested undertaking the noble task of removing that eyesore from the street, I will get you a lawyer or pay for your legal services or represent you personally…the choice is yours!”

Former Kiambu Governor William Kabogo joined the fray, questioning why the Cotu boss was so keen to have the road sign in place.

“Why fight so hard to have it there. If they remove it, let it be and move on,” he said.

City Hall has faced intense criticism for renaming the road without following due process.

However, Nairobi Deputy Governor Ann Kananu defended the move, saying the gesture is in recognition of Mr Atwoli’s selfless contribution and agitation for the rights of the Kenyan workers for the last 54 years.

“This road has been renamed after my good friend and brother bwana Francis Atwoli in recognition of his selfless contribution and agitating for the rights of the Kenyan workers in the last 54 years,” said Ms Kananu.