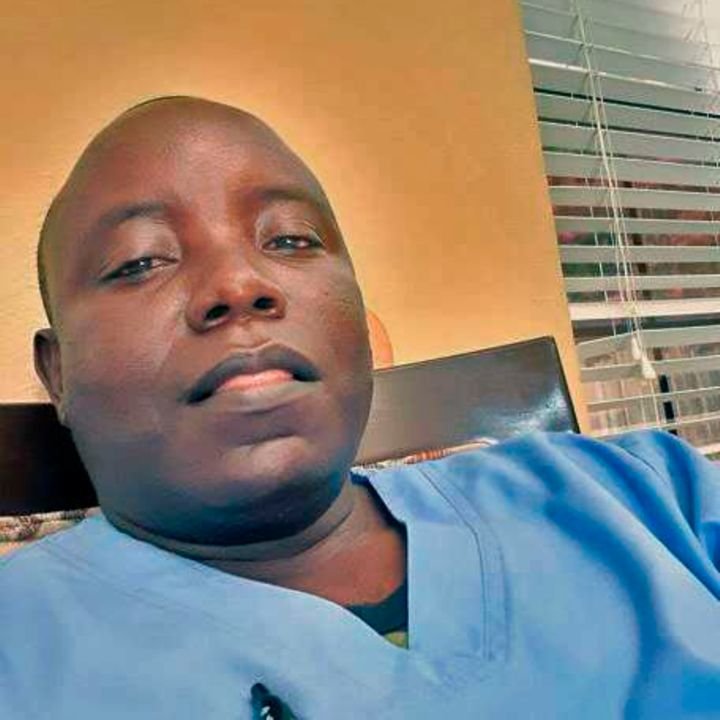 Thomas Oyaro was an industrious man who lived the American dream.

He believed that if you worked hard and played by the rules, your efforts would open up a world of opportunities. And so he racked up the hours in day and night shifts.

He had a well-paying job in Texas and was even building a big hospital back home in Kisii, which would have served hundreds – if not thousands – of low-income earners desperate for quality but affordable healthcare.

At 42, he had lofty dreams for his young family. But all that ended in nightmares when Oyaro was tragically snuffed out in his prime about a month ago by killers who remain at large.

Thomas Oyaro. He worked as a psychiatrist nurse in the United States.

Pool
His loved ones are now spending sleepless nights seeking answers as police drag their feet with investigations. The gruesome manner in which he met his death has left relatives, friends and villagers in shock.

On the night of September 13, his remains – stuffed in gunny bags – were thrown out of a speeding car at Konate junction in Nyamira County.

The body was in pieces. His arms, legs and waist were separated from the rest of the organs. His external genitalia were ripped off. The head is still missing. It’s unclear what could have led to Oyaro’s savage murder.

“We don’t know the motive. Whatever the case, it was horrible. He was tortured and died a very painful death,” the widow and mother of three, Ms Jackline Mokeira, told the Nation.

Ondari Ogega | Nation Media Group
Oyaro had just been home for two weeks. In the United States, he worked as a psychiatrist nurse. He had earlier served as a nursing officer with the Kisii County government at Nyamarambe.

He left three years ago to look for greener pastures, but visited home at least once a year and would spend a month with his family.

Prior to his death, he had changed his routine, but relatives did not suspect anything sinister. Oyaro left home on April 16 for the US, then returned on August 14. This was unusual.

“I don’t know why he came back sooner than expected. He didn’t finish his usual one-year stay in the US. He didn’t tell me why he had returned home early,” said Ms Mokeira.

“He wasn’t open to me upon his arrival at the airport. He told me he would arrive on Saturday, but he actually jetted in on Friday. Upon his arrival, his phone got disconnected and we couldn’t communicate.”

Oyaro told his wife the following day that he couldn’t call because he hadn’t replaced his US line with a local one. The couple spent the night together and on Sunday, they visited their son at Alliance High School.

They were, however, barred from seeing him because of Covid-19 protocols. They later travelled to their Rangwe residence in Homa Bay. Ms Mokeira works as an office assistant at the county government.

Relatives at the home of Thomas Oyaro in South Mugirango on October 25, 2021.

Ondari Ogega | Nation Media Group
The following day, they travelled to Gesonso in Kisii to inspect a hospital they were constructing. Oyaro had interests in the health sector.

They were, however, unhappy with an engineer they had hired to supervise the building. He had done so little despite having received so much money.

“We sacked the engineer. We also had to demolish part of the building because it had been shoddily done,” said Ms Mokeira, noting that her husband was to stay in Kenya for a month as he supervised the building.

All was well until the night of September 11. “He appeared disturbed. He had nightmares. He would wake up in the middle of the night terrified. He, however, looked jovial in the morning,” she said.

Ondari Ogega | Nation Media Group
She travelled to Ibeno later that day to visit a relative who had had a baby. Oyaro chose to stay home and take care of their last-born child, who is in Grade Two. When she returned in the evening, he was not in.

“I tried calling him but his phone went unanswered. He usually comes home by 10pm and stops at Shelton Hotel to study because of their strong Wi-Fi. He had been preparing for exams. Better qualifications would have enabled him to get employed by the US government,” said Ms Mokeira.

Sometimes Oyaro would spend the night at Nyamarambe, but he’d still call home. This time, he was quiet. “I called again and again. His phone went unanswered and I knew something was wrong.”

At noon on Monday, she visited the site and established that her husband had been there on Sunday evening. “He paid workers. He also paid our brick supplier, left at 5pm and boarded a boda boda that dropped him at Nyamarambe stage,” said Ms Mokeira.

A butcher also admitted to seeing him there. On Tuesday morning, she alerted her in-laws that Oyaro was missing, who reported at Nyamarambe police station.

“We placed announcements on the mainstream and social media. On September 15, I heard that a body had been dumped in Nyamira. A friend checked but it was a woman, so I stopped panicking. I had faith he was alive,” she said.

Then on Monday last week, her world turned around. She received a call from the Directorate of Criminal Investigations that fingerprints of a body that had been dumped at Konate junction had matched those of Oyaro’s.

“We have a relative at DCI in Nairobi, who helped to coordinate the identification process,” said Ms Mokeira. She said other than that, police have done “nothing else” in investigations.

Fast-track investigations
“We want to know the whereabouts of his phone. On the day the body was dumped at Konate, his phone signal was traced to a hotel in Nyamarambe. It remained on for some days,” she said.

Traders on the busy Kisii-Ikonge-Nyamira Road said the vehicle that dumped the body had no registration number.

“It’s a terrible incident. We promise to fast-track investigations. The killers will be known,” said Nyamira County Commissioner Amos Mariba.

“We are Christians. We don’t care about culture. We’ll just lay him to rest even without the head as we pursue his killers,” he said. He lamented that police have been reluctant to follow up on the case, citing complications.

“Police are not willing to serve. They just want to be pushed to follow up on this issue. They have the ability to track his phone and find out whom they were in contact with, but they have not done so.”

“My son visited us on September 8. But he was in a hurry. He said he would visit later. He told us that he wanted to go to his construction site.”

Oyaro’s nephew, Mr Douglas Orenge, offered: “My uncle’s phone was on for nine days. It has been a painful month. Police say they have important leads but they are not giving us any information.”

Related Topics:Kenyans in USNews
Up Next