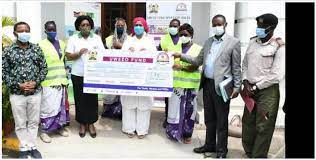 The Chief Executive Officer of Uwezo Fund Peter Lengapani has come out guns blazing to trash the Auditor-Generals report that cited that 4bn has been lost to graft. He said those spreading the lies are enemies of development and are just out there to taint the good image of the fund.

In an exclusive interview with KSN Media, the CEO on the contrary trashed the reports as unsubstantiated and highly erroneous.

“What the Auditor General gave was a qualified opinion and that does not prove that any money was indeed lost. This fund has structures and is supported by the legal framework so the kind of money they said is lost is not possible…which money? How was it lost?” he asked.

The outspoken and best-performing CEO also cited major achievements the fund has been able to achieve through changing the lives of more than 20,000 youth groups across the country. This fund is issued without any interest and no collateral is required.

Through this fund, the youths have been able to improve their credit rating and this has made it easy for them to access credits at a bank.

“The fund is well policed. What we do as a board is just oversight to make sure it reached the intended groups and does the functions it was meant to do. We also take our time to train the youth groups on the best way possible to utilize the fund for development and prosperity.

“Despite us having some few teething problems, let me acknowledge that the fund has been a game-changer in many aspects and the majority of our youths can attest to this,” Peter concluded.