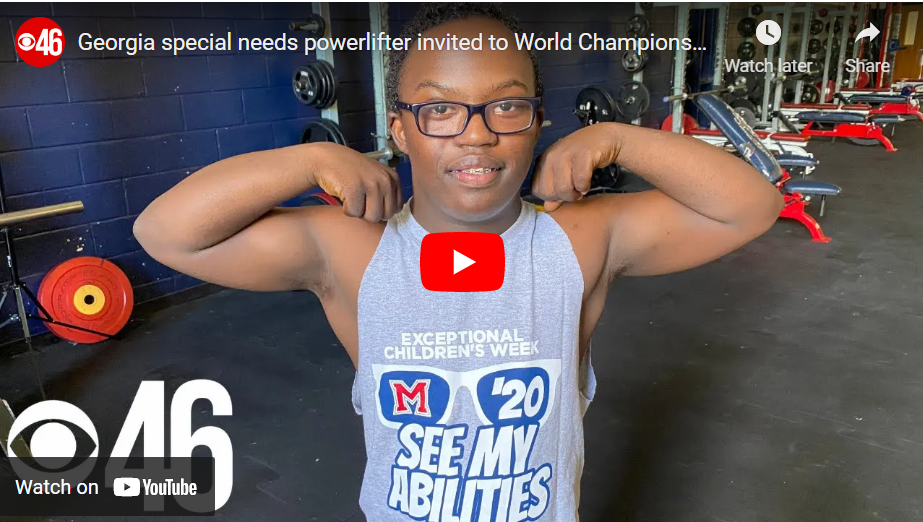 Dave Gituthu, a Kenyan-American teen with special needs is making heads turn. His fame, brough about by his athletic skills, is not only being celebrated in Atlanta, Georgia, but beyond the borders.

A man of few words, the 18 year old may be small in stature, but has the will of a giant.

Githutu, who has Down Syndrome, is a Milton High School student and has been doing Powerlifting for three years and has just qualified for the Amateur World Powerlifting Congress’ World Championships in Manchester, England.

He is expected to leave this coming weekend.

Dave’s story is uplifting to say the least, even as he looks beyond the horizon ready to break more records.

On Sunday, the teen was celebrated by the Kenyan American Community Church (KACC) in Marietta, Georgia, where he and his family have been members since he was little.

“This is God’s doing,” said the presiding Bishop, Rev Dr GG Gitahi. “Indeed we serve a living God. Let not anybody tell you otherwise,” he added.

“We have been through a lot but God is faithful. When Dave was born, we were told that he would only live for a few days. I refused to believe that and put my faith in God. Look at His doing,” said an elated mother, Ms Esther Githutu.

“To the parents out there, never believe those who say your child can not do this or the other. As long as they can breath, they can do it..trust me,” she said.

About 4 months ago, the 110-pounder qualified for the Amateur World Powerlifting Congress championship where he will participate with non-disabled lifters in his weight class.

Josh Porter, his coach, recently launched a GOFUNDME campaign to help raise funds for the UK trip, in which he will also be accompanied by his mother and grandma.

”I pick him up some mornings at 4:45, he trains with me and some of my friends. He doesn’t complain, comes in there, and trains for two hours,” said Coach Josh Porter Special Olympics Powerlifting.

”They want people to see them for what they can do, not what they can’t do,” said Coach Josh Porter Special Olympics Powerlifting.

One of Dave’s many abilities happens to be powerlifting. In fact, he has been invited to compete in Manchester, England for the Powerlifting World Championships.

The competition is in September.

In addition, Lucky’s Burger and Brew in Roswell will host a fundraiser during it’s annual live music, End of Summer Bash, Saturday at 5 p.m.

The restaurant has contributed thousands of dollars to sports programs at north Fulton high schools since it opened in 2010, Lucky’s General Manager Ted Lescher said.

“I’m going to get Dave up on stage and introduce him to everyone,” Lescher said. “When I learned that this kid was on the world championship level, I’m like, ‘I don’t know anyone who’s the world champion of anything.”

Dave will be competing in the Junior 18–19-year-old division. This championship is not the Special Olympics, so he will compete against all lifters in his weight class. Dave weighs only 110 pounds, but at Nationals, he totaled 595 pounds combined in the squat, bench press, and deadlift.

He says weightlifting is “everything” to him. He started training with Porter, an adaptive physical education teacher at Milton, three years ago.

A local gym allows Githutu to train with Porter for free several times a week.

Last April, he overcame a setback while competing as a Special Olympics athlete at an Amateur American Power Federation weightlifting event in Gatlinburg, Tennessee.

His trainers says his powerlifting squat was subpar for what he was capable of.

According to Porter, Dave powerlifted 185 pounds in his squat compared to the 205 pounds he has lifted when training.

The performance qualified him for the England competition.

The UK competition is an important opportunity for Githutu. He’s scheduled to undergo open heart surgery next spring, his mother said.

Dave’s mom says he was born with ventricular septal defect, which is a hole in the wall of his heart, she said.

She says although the condition is not affecting him at this point, his doctors believe it’s time to close the hole.

“They are worried about his old age and him having heart failure or a heart attack,” she said. “So we wanted to give him this opportunity for the competition in England. If he’s going to bounce back, we don’t know.”

Early in the pandemic, Githutu didn’t have access to weights and exercised with gallon containers filled with juices, milk or water, Esther Githutu said.

She said that while her son has always been a confident person, realizing what he can accomplish through weightlifting has given him a greater sense of himself.

“He never used to know danger, now he has more of an awareness,” she said. “He has more self-discipline. It’s really made him grow up. And everyone loves him. He just has a good heart.”

Watch: SIZE 8 And Husband Dj Mo Allegedly BREAK Up! | ROUND UP!