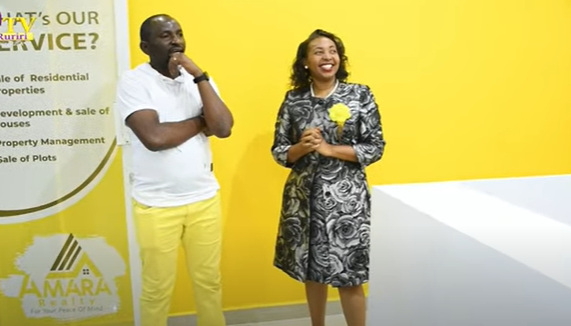 In August this year, a fast-rising Kenyan land selling company, Amara Realty, moved its offices to a bigger and better location off Thika Superhighway.

Jane Baiyu, the Company CEO  spoke exclusively to KDM’s Jeremy Damaris  shortly after unveiling the new offices at Jewel Complex next to the prestigious Thika Road Mall (TRM) in Roysambu where she disclosed that the company had a bigger vision and was destined for greater things.

She said that, as an incentive, Amara Realty was selling quarter acre pieces of land in a much-sought-after neighbourhood of Nanyuki at highly discounted rates.

“We have moved from a smaller office to a bigger one. Every day we always aspire to move from one level of glory to the other. The Lord has moved us to  a new level of glory and we are expecting to grow to different frontiers and impact the communities around us,” she said.

“We hope to make people’s dreams come true as we enlarge our vision and territory, and as Isaiah Chapter 43:19 says, the Lord is doing a new thing,” she added.

She explained that they were embarking on two projects in Nanyuki, one located about 17 Kilometers from Nanyuki town as the other one is situated about 18km away.

“A quarter acre is going for Sh 400k but we are giving a discount of Sh20k to those who will pay in cash,” she said and added that they are also avcoomodating those who wish to pay in instalment. Watch the video below courtesy of Kenya Diaspora Media: