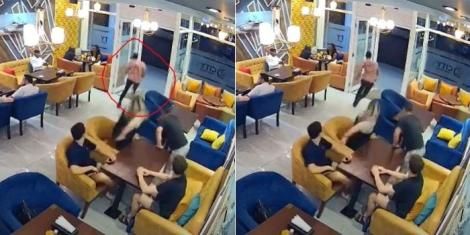 On Monday night, May 16, two foreigners were the victims of a brazen theft in Kisumu’s Central Business District, which is hosting the Africities summit.

The foreigners, who were in the company of their colleagues at a hotel in the lakeside city, had placed their cellphones on the tabletop where they were seated.

While they were conversing with companions, a man was caught on camera casually coming into the restaurant while talking on the phone.

He approached the table where the foreigners were seated and feigned to take the seat beside them. He hung up and put his phone in his pocket before grabbing the handsets on the table.

The crook fled for the door, and despite the foreigners’ best efforts, one of them fell at the door while the others tried to pursue him.

A diner in the same restaurant was also seen attempting to apprehend the robber, and hotel employees stepped in as well. The robber managed to escape with the two cellphones.

Hundreds of foreign visitors are in Kisumu for the Africities Summit, which President Uhuru Kenyatta officially opened on Tuesday, May 17.