VIDEO: Clearly drunk Kenyan Supreme Court Judge brags about studying in the US at a funeral 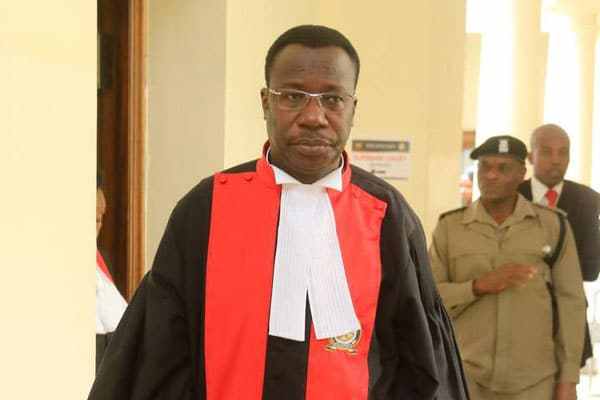 A video of a visibly drunk Kenyan Supreme Court judge Smokin Wanjala bragging to villagers about his impressive academic credentials has emerged on social media.

Members of the legal profession are among the most respected people in the society, largely because of how they carry themselves in the corridors of justice.

Justice Wanjala is one of the legal minds who have won the admiration of many, judging from his grounded and sober personality when presiding over matters in the courts with the 2017 Presidential Petition, arguably, standing out.

However, the video of the judge giving his speech at the burial ceremony of Rtd. Justice Lawrence Peter Ouna in Busia County on Saturday, February 6 has taken many aback.

Mourners got the see the other side of Justice Wanjala, who was visibly intoxicated.

In the two-minute video that has surfaced on social media, Justice Wanjala addressed the mourners in his local dialect but his speech was hazy.

His movement was not stable as he staggered, like a drunk man.

To the amazement of the mourners, Justice Wanjala shelved his no-nonsense demeanour to brag about his academic and professional achievements.

“I am well learned. I went to university and attained a degree. I also undertook my masters at Columbia University. I learnt English and I am a fluent speaker,” he said in a hazy speech amid laughter from the crowd.

He went ahead to praise the deceased describing him as “a great man”.

Before his appointment to the Supreme Court of Kenya, Justice Wanjala had been a Law Lecturer at the University of Nairobi for 20 years (1986-2004) where he offered instruction in diverse areas of law including, Land Law, International Law, Human Rights Law, Criminal Law and Law of the Sea.

He was appointed as Assistant Director of the defunct Kenya Anti-Corruption Commission (KACC), in October 2004 where he served in that capacity until 2009.

In 2012, Justice Wanjala received the Presidential Award of the Chief of the Order of the Burning Spear (CBS) [First Class], the 4th Highest Civilian Award in Kenya, for his distinguished service to the public.

In 2016, Justice Wanjala was among six people shortlisted for the position of Chief Justice. He later lost to Justice David Maraga.

In September 2017, he was one of four judges who voted to nullify President Uhuru Kenyatta’s win in the August 2017 presidential election.

Before joining the judiciary, Wanjala worked as a senior law lecturer at the University of Nairobi for 20 years.

How fraudsters took Sh3m from account of a dead reverend