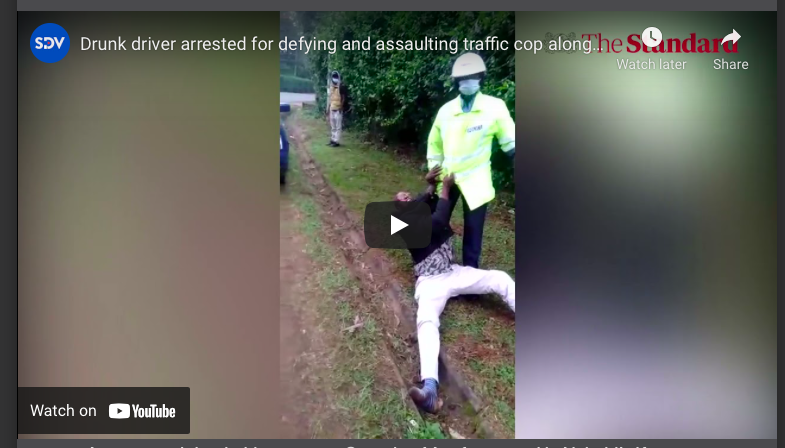 A suspected drunk driver was on Saturday, May 1, arrested in Nairobi’s Karen area for allegedly defying a lawful order and assaulting a traffic police officer.

According to the police report, the suspect was arrested near Karen Country Club after defying orders from  the officer and attempting to escape.

The incident allegedly happened on Magadi Road when a traffic officer on duty reportedly noticed the suspect driving dangerously and tried to stop him but he declined.

Police said the inebriated suspect who was driving a Subaru salon car Reg. No. KBM 149F from Ongata Rongai towards Kiserian hit the officer’s motorbike as he tried to pursue him.

The chase continued to Karen county club where the driver parked his vehicle off the road, alighted and accosted the police rider and assaulted him as captured in a video that has since gone viral.

In the clip, the suspect is captured wrestling the officer as he shouted to be taken to the police station as other motorists tried to stop him from fighting the officer.

He accused the traffic officer of harassing him in Nairobi yet he was based in Rongai.

“I cannot leave you, take me to Karen Police Station, not any other station. You are from Rongai and you are harassing people in Karen,” the suspect is heard shouting.

The officer with the help of members of the public overpowered the suspect before alerting his colleagues from the nearby Karen Police Station.