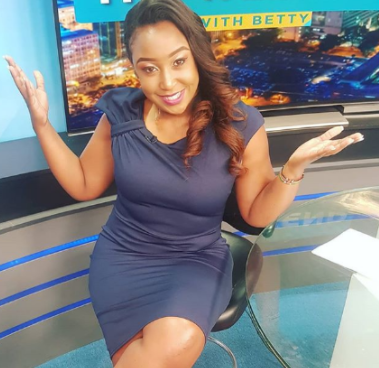 Betty Kyallo is set to make her prime-time television comeback on March 7  for an entertainment show on KTN  three years after she left the station.

Making the announcement Thursday, Kyallo gleefully teased her followers in an Instagram post that she was back, and shared two photos of her at the Standard Group Headquarters, along Mombasa Road, Nairobi. “Told you it wasn’t for long. I am so blessed. Grateful to God,” she captioned.

Kyallo’s post came hours after she, alongside the President of Comedy Africa – Eric Omondi, delighted fans after they disclosed that a project, which debuts on the same date, was in the works. “7th March,” Omondi posted, sharing footage of Kyallo with him in a boat at Lake Victoria.

Kyallo’s original video has since received over 72,000 likes and hundreds of comments from eager fans anticipating the return to the screen of the presenter, who on leaving KTN in 2018, joined K24 in December that year before exiting the Mediamax owned station in May 2020.

One said: “Now what should I do na niliuza TV venye uliishia.” Another added: “Congratulations. Wamalize kabisa.” A third said: “Wow!! Our gal is back where she belongs.” Others said: “Wow Great we call Him God of another chance… Good Luck Betty” and “Friday Briefing Aaaagaaaaiinn.” And another commented: “Are you serious umerudi job? I really missed you!!!!”