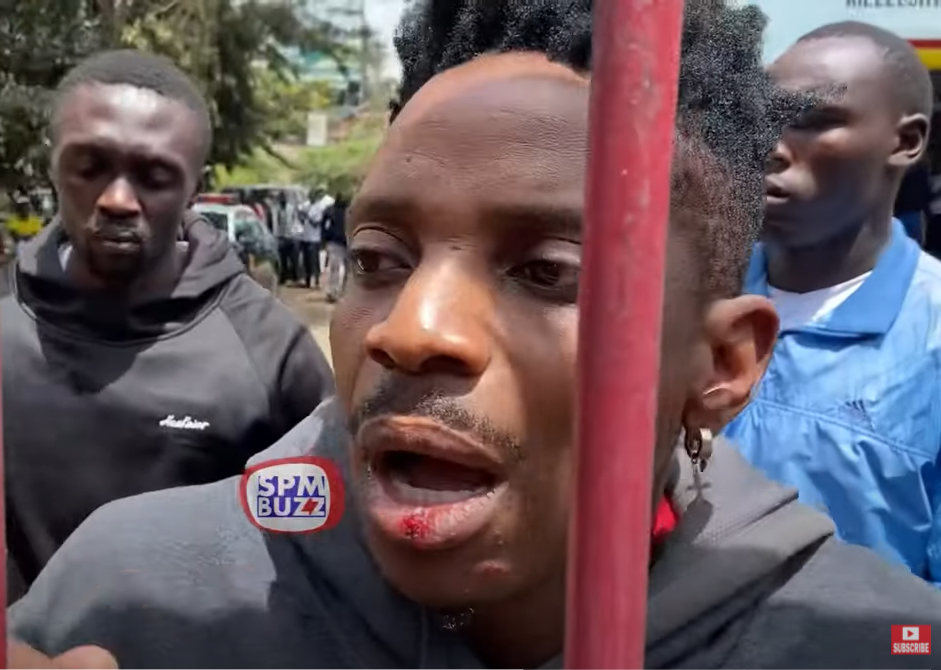 According Omondi, the altercation occurred just hours after it was revealed that Harmonize had been arrested and carted off to the Kileleshwa police station after failing to appear at several clubs despite being paid for them.

Omondi has reported the assault at the same police station and was awaiting the arrival of his legal team for further direction on Sunday afternoon.

In the interview below, the comedian told the media that his Sunday visit to Kileleshwa police station was an attempt to bail out the Tanzanian star.

“Harmonize ameshikwa kule, yeye ni mahabusu he had tried to con four clubs…and yesterday refused to do the show…. I haven’t slept, this is how I was dressed yesterday,” Omondi said.

“I did not bring him here, four clubs wameshikana wakamleta hapa,”

Sporting a visibly bruised chin and bloodied lip, Omondi told Citizen Digital that he had tried in vain to ask Harmonize to refund the money clubs had paid for the appearance.

“I told Harmonize that organisers have said no, let’s just return the money since the organizers had stipulated that he could not do another concert without their knowledge,” Omondi told Citizen Digital.

HARMONIZE HAS RESPONDED TO THE ACCUSATION: WATCH

Harmonize, according to the comedian, was extremely rude and told him to sod off before locking himself inside his hotel room.

Afraid that Harmonize would fly out in the morning, leaving in his wake, the wrath club promoters who had already paid hundreds of thousands, Omondi pitched camp at the Hotel and waited for morning.

Early Sunday, several complainants  trooped to the Kileleshwa police station, seeking to have the singer held until their dues had been refunded.

Among those who are said to have lost money is Captain Lounge’s Jor Barsil who claimed to have parted away with Ksh.450,000 and Ksh.1million, respectively,  in appearance and set up fees.

He also claimed that the no show had greatly irked the patrons, some who had paid upto Ksh.5,000 to cavort with the star, throwing him into losses and seriously denting his reputation.

Others who were seeking compensation included club Cocoricos which had reportedly paid some Ksh.300,000 and a former Nairobi Governor who had also made payment for the artist to make an appearance at a Mombasa-based club.

The Tanzanian star was in the country for the Afrika Moja Concert which had been delayed since 2020 due to the limitations of COVID-19.

His Kenyan visit was dodged by drama from the onset, with the musician as well as Eric Omondi forced to take to their heels on Friday after irate patrons descended on them at the Captain’s lounge

According to the Lounge’s director ‘Konde Boy’ was supposed to perform for one and a half hours at but only did a measly five minutes.

“I paid Ksh.450,000 to Melamani Limited for harmonize to come to the club for a party and to be with the fans for one and a half hours, but when he came he only stayed for not more than five minutes,”

“This angered the fans who wanted to beat him up but I protected him, I want be refunded the amount I spent,”