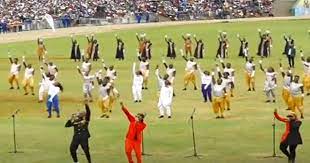 Kenyans were treated to a refreshing performance from a long list of artists booked for the event.

The three gave a thrilling performance of their musical collaboration that was infused in gengetone tune before President Uhuru Kenyatta, guests, and thousands of Kenyans who were following the event.

While waving Kenyan flags, the three burnt the dance floor in a captivating manner.

Femi One showed why she is regarded among Kenya’s top female rappers, Iyanii did the last verse where he highlighted some of the achievements of former presidents, including free Nyayo milk by Daniel Moi and free primary education by his successor Mwai Kibaki while Iyanii celebrated the president for the numerous development projects undertaken during his tenure.

READ ALSO  Ex-policeman shot dead in a botched robbery
Related Topics:EntertainmentNews
Up Next