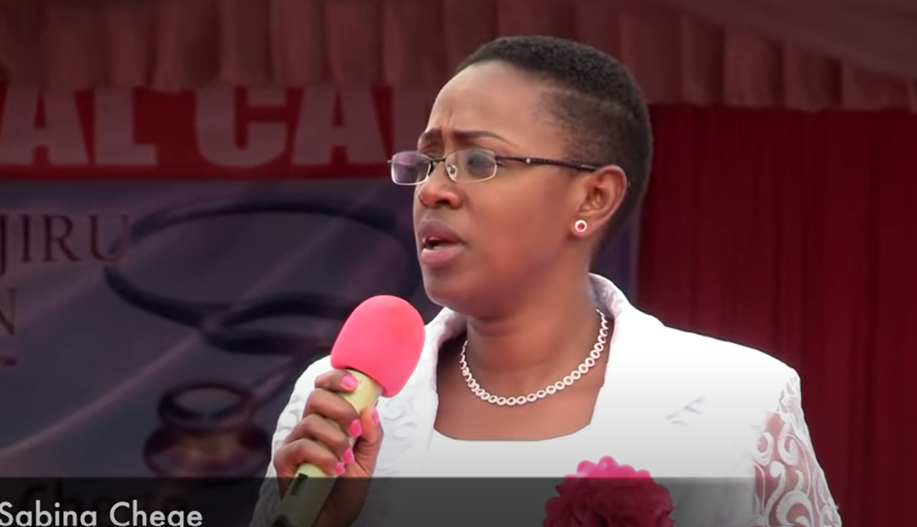 Rest you forget, a few years ago, Murang’a Woman Rep-elect Sabina Wanjiru sought to clear the air by announcing that she only had one husband.

Ms Chege, who had just won her second term as the county MP, said that she was happily married to one man.

While receiving her certificate from the county returning officer at Murang’a University, she said bad things have been said about her in social media.

But why has it been difficult for her to convince some people that she is, indeed, happily married?

During the campaigns, social media was awash with propaganda that she raised money for her campaigns in dubious ways.

Ms Chege, a mother of three, is married to Mr Maina Gathito, the former Kenya Dairy Board acting general manager.

She has termed her family as her pillar and support.

And in August 2018, she publicly dismissed reports claiming that she had a romantic affair with the late musician John De’Mathew and even had a child with him.

“I hear they say we had a child with De’Mathew, if that was true, the child will be here for the burial,” she said.

Chege pleaded with the media to respect the De’Mathew family and herself, adding that apart from being a politician, she is also a mother who has a family.

“They have writtenabou me and De’Mathew everywhere and even on front pages, but I want to tell them that the family and I deserve respect,” she retorted.

Chege confirmed that De’Mathew was indeed a close personal friend, adding that the two enjoyed a healthy professional relationship. This, Chege said, made many believe that the two had a love affair to an extent that DeMathew’s girlfriends remained unsettled whenever she accompanied him to public functions.

Chege featured in De’Mathew’s song “Njata Yakwa” as a video vixen years before she joined politics.

She says she featured in the video just like any other actress and had nothing to do with a relationship.

“After we did Njata Yakwa, it became such a hit that even when I would accompany John for dance, his girlfriends would be uncomfortable and avoid me thinking I was his official partner. The truth, however, is that John was just a close friend,” said Chege.

Chege said she first met De’Mathew when she worked for a media house and guided him to produce his first music video at a time when no other Kikuyu musician had done so.

In April, she thanked the people of Murang’a for re-electing her and promised to serve them diligently and humbly.

She said her political rival,  journalist Waithera Muitherania, was a worthy opponent and extended an olive branch to her.

She also praised the voters of Kandara, Kigumo and Maragua sub-counties for electing three women to represent them in the 12th Parliament.

Chege has since decided not to seek any elective seat in the coming general election. In April 2022, She bid the residents  goodbye on Sunday saying she will venture into national politics.

She and her supporters were then hopeful that she would be picked as Azimio la Umoja Kenya coalition presidential running mate by Mr Raila Odinga. That position has since been given to Nark Kenya leader, Martha Karua.

While meeting her supporters at Murang’a Teachers Training College, the county MP explained that after she was appointed to be among members of Azimio la Umoja-One Kenya coalition’s top leadership, she will concentrate on national politics and popularise the coalition to Kenyans.

“I’m grateful to serve Murang’a people as the pioneer woman representative under the new dispensation of the Constitution. It has been an honour, an opportunity to grow in leadership, serving with dignity and humility,” she remarked.

Related Topics:SabinaSabina Chege
Up Next