VIDEO: I quickly let all men who try to katia me know that I am married- Monica Kagoni 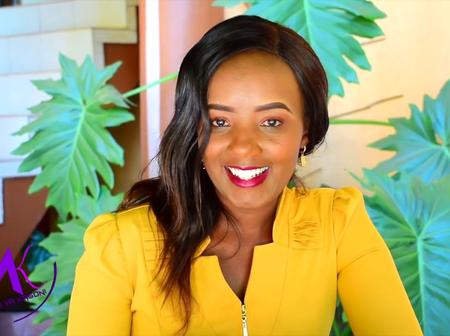 Monica Kagoni, the host of Metha ya Kagoni, an online media Show, has said that unlike many women who are not quick to reveal their marital status, she let’s men know from the outset that she is taken.

Kagoni, who got married in 2012, says it makes it much easier for her when she comes out and tell men who send her mistaris that she is someone’s wife.

“I don’t lave any room for ideas,” she says.

She was answering a question on how she deals with members of Team Mafisi during a wide ranging interview.

The mother of two and the Founder of Metha ya Kagoni says her love for God and prayer always drove her to the desire of being a catholic nun.

Nonetheless, she says marriage is a beautiful thing and with its share of ups and downs, one must learn to ‘commit one more time’.

She also says she likes things simple and discourages young women from outspending themselves by doing extravagant weddings which they can ill afford.

“My wedding gown cost me less than 5K…and it was a rental,” she adds. She however says shhe has no problem with people who can afford expensive weddings. “Yes, go for it,” she says.

Here’s the story of her upbringing, marriage, motherhood, career as well the hits and misses. She spoke to her former colleguea at Inooro TV, Carol Kinyugo who just launched her new show, “This is me.”

READ ALSO  KRA in plan to snoop on your WhatsApp chats

Cardinal Njue’s book on his time in church service