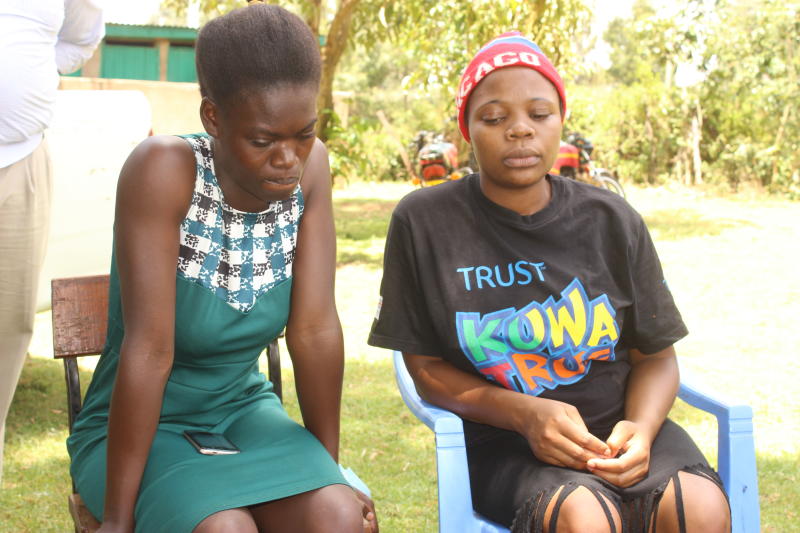 Nearly two years after the Kakamega Twins saga that got the country’s attention for days, the families of the three girls, Mevis, Melon and Sharon have nothing to smile about, as they struggle to make a living without a constant source of income.

Rosemary Khavelele who gave birth to Sharon Mathias and Melon Lutenyo but raised Melon and Mevis Mbaya claims that she has been going through a rough time providing for the three girls on her own without any help.

She claims that a number of well-wishers who pledged to pay school fees for the girls went missing leaving her stranded.

Melon Lutenyo and Mevis Mbaya currently have been at home for two weeks due to school fees despite the fact that they are set to sit for their KCSE examination next month.

Rosemary has also threatened to sue Kakamega Hospital in the next one month, claiming that the girls were convinced not to take legal action by an unknown person who had an interest in the matter.

The three began their journey to know their biological parents after the two of them discovered through Facebook that they were identical and the end result was a DNA test that confirmed that they were indeed twins who were separated at birth in a Kakamega hospital.

The three girls’ grabbed headlines from early April to late June in 2019 following Melon and Sharon’s resemblance that made many conclude they are identical twins.

The identity of the two girls did not only make news within the walls of their country but also across the border.

Having both been born in August 1999 in the same hospital, Kakamega County Referral, and raised in different regions, the events that reunited the two girls 19 years later is a classical case of a well-scripted movie intertwining destiny and coincidence.

It is after Sharon, who was raised in Nairobi by Angeline Omina, joined Shikoti Girls Secondary school in Kakamega that the journey of the two meeting began.

For Melon, joining Kongoni Secondary School after failing to adapt to a boarding school life marked the journey of meeting her very possible twin sister.

After academic outings, classmates and teachers who met any of them could not understand how their student and classmate belonged to the other school.

Melon did not take the news of her resembling someone seriously. She knew she had a twin sister by the name Melvis but they were not identical to warrant comparable attention.

But the reports became persistent each day teacher and classmates mate Sharon.

It was until she received a picture of Sharon and her teachers that it dawned on her that the puzzle was real.

“When the teacher brought the picture to me, she placed it before me and asked me do you know this person? I told her, how can I fail to know myself? The teacher asked again, are you sure this is you?” Melon said during an interview with KTN.

“I told him this is not my uniform but it is me. After insisting it was me, the teacher opened up and said the person in the picture was not me but Sharon Mathias from Shikoti Girls. I could not believe it. It dawned on me that I have heard of this confusion before and began searching for answers,” she added.

During the holiday the two girls made efforts to look for each other. After several interactions, a determined and curious Sharon took a journey to Nairobi.

On arrival in Nairobi, Kangemi, the two had an emotional reunion that any long-separated identical twins can have.

When it was clear to both families that their appearance had all hallmarks of resemblance, a DNA test was needed to put things into perspective and to end the speculations.

A DNA test by Lancet Kenya on June 10, 2019, ended months of anxiety and speculation about the girls’ parentage by confirming the two girls are indeed biological twins separated at birth in 1999 at the Kakamega General Hospital.

This is a story that has had many twists, but thankfully it was conclusively finalised.

The families and the girls were however left to cope with the emotional trauma, to deal with.

The mix-up that separated the twins at birth is a case of negligence at the Kakamega General Hospital which the Directorate of Criminal Investigations (DCI) vowed to unravel with many Kenyans saying families could be raising children that don’t belong to them as a result of such cases.

Quick expansion cost me almost everything

Confusion as Ruto allies back Matiang’i