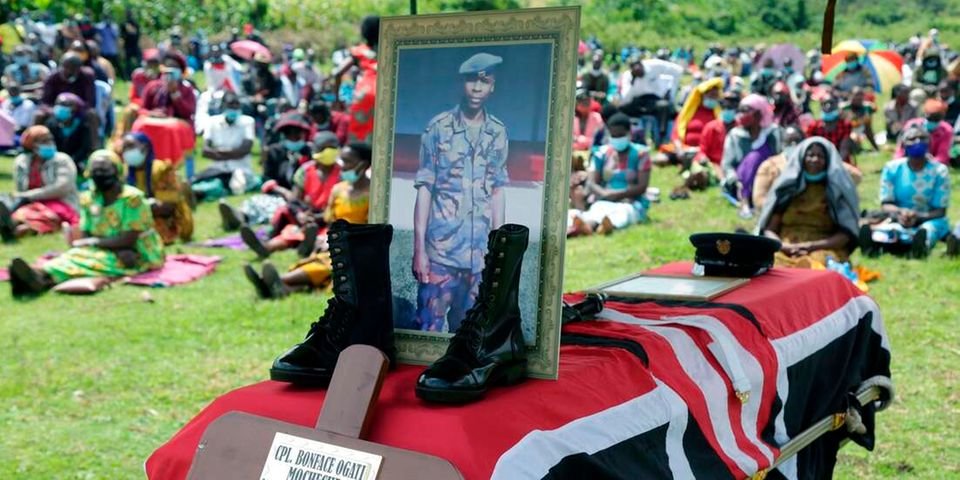 Emotions ran high as a Kenya Defence Forces (KDF) soldier who was killed in the June 24 helicopter crash in Ol Tepesi, Kajiado County was buried Tuesday.

Hundreds of friends, relatives, and military workmates of Corporal Bonface Ogati Mocheche, who died aged 30, gathered at his family’s farm in Gionseri village, Nyamache in Kisii County to lay him to rest.

KDF said all the passengers aboard the Kenya Air Force helicopter Mi171E were accounted for, and that the officers were on a training mission when the incident occurred.

Everyone who got the opportunity to speak at the funeral condoled with his family and praised the fallen soldier, saying he was a hardworking and a humble young man.

Major General F.O. Ogolla of the Kenya Air Force, in a condolence message, termed the accident as unfortunate and prayed for the family’s strength.

The same sentiments were echoed by Brigadier Githinji of the Moi Airbase, where the late officer worked.

Corporal Ogati, who joined the army 11 years ago, was the only son and first born in a family of three. He was also the breadwinner before he met his death along with other colleagues. 13 others were rescued from the chopper crash site in Kajiado.

Mr Zedekiah Mocheche, his father, said his only hope had been taken away and called upon KDF to help his family in any way it could.

“I do not have anything to say other than to thank all of you. He was our only son whom we depended on for everything. If there is any help, do not hesitate to let us know,” Mzee Mocheche pleaded.

Born in 1991, Corporal Ogati attended Gionseri Primary School between 1994 and 2005, before joining Riokindo Boys in 2006. He then joined Gionseri Secondary School up to 2009.

A year later, he joined the military and was trained in Eldoret before being posted to Nairobi.

He leaves behind a widow and young daughter, Brenda Ogati.