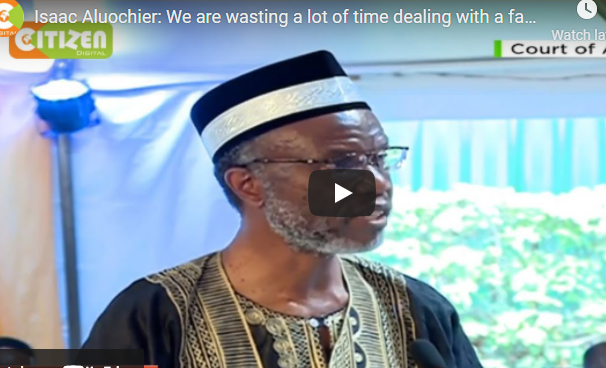 Little known Kenyan lawyer Isaac Aluochier lit the interwebs on  Friday following his articulate presentation at the Court of appeal in Nairobi where he expressed his displeasure over what he termed President Uhuru Kenyatta’s contempt of court on several occasions.

On the fourth and last day of the BBI hearing, Aluochier who lives in Rongo, Homafor formulating the BBI steering committee. He added that Uhuru is the subject of Kenyans, who are the sovereign of Kenya, who delegated the power to him, and not the other way round.

Aluochier added, “We just wanted to drive on one point, appellant Uhuru, as the President of this country, please obey the law. Stop disregarding this Katiba of ours, especially when you are the number one citizen of this country.”

Aluochier argued that Uhuru, who is the appellant in the case, cannot be easily accessed to be served with court papers.

He said that while formulating the BBI steering committee, the president said in the gazette notice that he was acting in his official capacity as the president.

“There is no authority granted by the Constitution to the President to establish an organistion or an entity that deals with the Constitution change, that is an act of Parliament. He was acting beyond his jurisdiction…consequently, he was not performing official presidential functions, he was performing his private business.”

“When the president was touring in the company of Senior Council Senator James Orengo, he was saying, watanipata wapi wanipatie makaratasi zao za kortini, watanipata wapi (where will they get me to serve me with court papers)” of course, if you go and barricade yourself in State House, an ordinary Kenyan like myself, I cannot penetrate because the security is going to stop me,” Aluochier said.

He said that the country has come from the days of darkness and that Uhuru is trying to take the country back to those dark days.

“Appellant Uhuru knows these things. It’s not that he doesn’t know, it’s only that he plays hardball. That’s basically what he is doing…I am not surprised that he is behaving this way because that is his nature.”

Aluochier added that it is not the first time that Uhuru has contravened Chapter 6 of the Constitution, alleging it started in 2012 when he was the Deputy Prime Minister and at the same time an official in the Kanu party.

“You took the oath to obey, respect, uphold, and defend this Constitution of Kenya. And you are not doing it. Instead, you are the one leading the process of amending and tearing apart this Katiba of ours, and these are the things that annoy me as a Kenyan.”