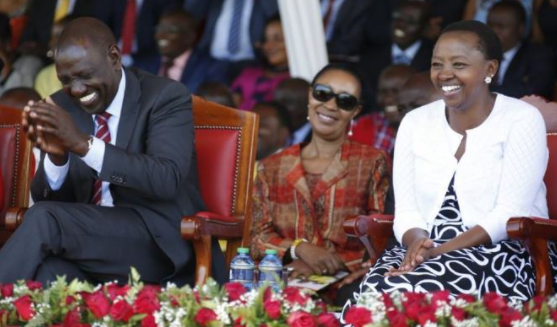 Deputy President William Ruto has revealed that before he married his wife Rachel, there was ‘some competition’ from some men in Luhyaland.

Speaking on Jalango TV, an online TV channel, the DP also revealed that he has been forced to abandon his early morning road joggings for late evening workouts in the gym due to strict controls of his security detail.

He said he misses going out for window shopping and early road workouts which he cannot do anymore because of his position in government.

The DP said his position has curtailed his movement such that he cannot window shop to check on the latest fashion in town.

“I miss window shopping. Just walking around to admire stuff… see the latest fashion, like this shoes (shows his shoes to the host). Window shopping is a good thing,” he said.

“But from where I sit, it is impossible to do it. Hiyo watazusha (security detail will not allow it) because for me go out, I will be forced to put on goggles which is not a good thing.”

Known for his early morning road runs, the DP said he has been forced to slow down on the advise of his security detail.

“I only do it in the evenings and in the gym,” he said, revealing that running on the road would cause commotion.

“My security detail are very hard on me. To leave this place (his residence) I will have to answer a lot of questions which makes it complicated. I prefer to do it in the gym.”

He also recounted his early days when he sold chicken along the Eldoret-Bungoma highway, saying that he still sells chicken and eggs and that he has also upgraded to rearing chicken and chicks.

“I can stop selling chicken because that is the basis of my blessings. You don’t abandon something that gave you blessings,” he said.

“I used to sell chicken between for Sh11 to Sh14. Now a chicken goes for between Sh800 to Sh1000. This goes to show that every hustle is worth it.”

Family that died at Magufuli’s farewell to be buried today