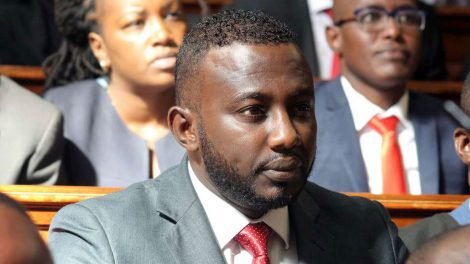 A youthful man, who released a video of Lamu senator Anwar Loitiptip allegedly smoking shisha at a city restaurant, Wednesday pleaded guilty to charges of attempting to extort the lawmaker’s female friend.

Jones Ochieng’ was charged at Milimani law courts with attempting to extort money from the woman, a charge he admitted to claiming he had already released a video of Loitiptip smoking shisha.

He said he recorded the said video on February 12.

Ochieng’ intended to receive Sh200,000 from Loitiptip after recording the lawmaker and the woman allegedly smoking shisha in contravention of public health regulations.

He told chief magistrate Martha Mutuku that he recorded Loitiptip because smoking shisha was illegal and leaked the same to blogger Edgar Obare who shared it on his social media pages.

The Ministry of Health’s public health department banned the consumption of shisha in 2017.

Ochieng’ confessed that he sent the video to the senator and demanded that he sends him Sh200,000 to bar its leakage but Loitiptip declined.

He then sent the lawmaker another video of his lady friend allegedly pleasuring herself in public at the restaurant and later shared the videos with Obare after his extortion efforts failed and also posted them on social media.

Loitiptip and his lover reported him to the police on February 15.

Ochieng’ has been remanded at the Industrial Area Remand Prison awaiting his sentencing on March 3.

READ ALSO  We got the Covid-19 jab, this is how we feel
Related Topics:Senator Loitiptip
Up Next