VIDEO: Mungai Eve defends police for arresting man who 'defamed her,' claiming to be behind her success 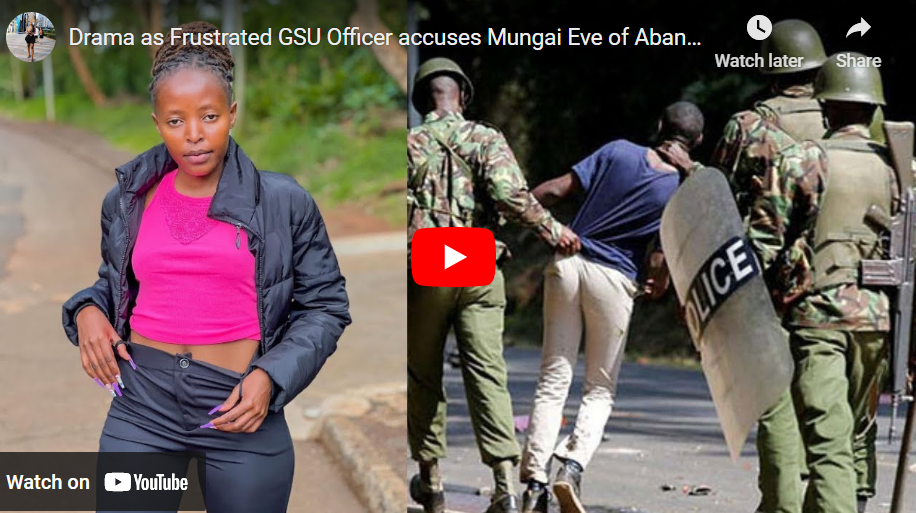 A man who went on social media to sensationally claim that he was behind YouTuber Eve Mungai’s rise to fame has been arrested and is being held at Kileleshwa police station.

In a video that went viral last week, the man, who had donned police uniform, said he used to pay Mungai’s rent and even bought lunch for her interviewees as she was starting out.

He said that he wanted her to pay him back, claiming she no longer picks up his calls since she “became famous.”

“Guys, I have a sad story I want to share with you I know most of you will end up insulting me, but the truth must be told the story is about Mungai Eve before she became famous sijui niseme ama nisiseme.

“I remember buying lunch for those guys you used to interview walikataa shuguli yako kabisaa juu hukua na anything so nowadays you are outside huko hiyo unatembea social media nakumbuka nyumba nilikua nakulipia na caretaker niko na number take hapa and now that I am calling you unanizimia simu,” he said.

Mailu Mwendwa, 25, was arrested at his house in Pipeline on Friday and several items were recovered from him including; a jungle trouser, jungle jacket, a pair of boots and two communication gadgets.

While responding to the accusations levelled against her, Mungai lamented the use of social media to spread propaganda and chase clout at the expense of people’s reputations.

Earlier in the week, Mungai’s lawyer had sought a public apology, done as prominently as the allegations. However, on Saturday, he said the “purported apology was no more than a joke.”

READ ALSO  VIDEO: Dramatic moment as Ruto breaks security protocol, catches Aide de Camp off Guard
She vowed to take legal action against Mwendwa to serve as an example to those with similar traits.

“The latest author has attempted to damage my reputation among my peers, business partners and media colleagues in general hence threatening my whole entity as a brand.

“I hope this shall not only be a learning experience but a warning at the same time that using others via unscrupulous ways to climb up the social-economic ladder is not ideal but illegal too,” she wrote.