VIDEO: Murkomen predicts Uhuru will be President for a 3rd term 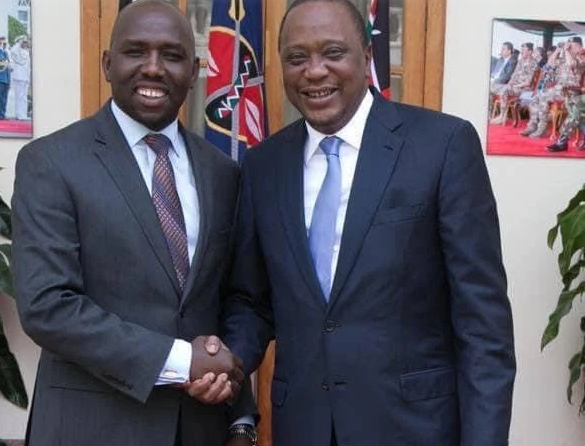 Controversial Elgeyo Marakwet senator Kipchumba Murkomen has said that Uhuru Kenyatta will find a way to secure a third term as President.

Murkomen however says this will not be through the conventional way but through a puppet in the Mount Kenya region.

The proxy the outspoken lawyer was referring to is the likely running mate for ODM leader Raila Odinga after word went around this week that President Kenyatta will play a key role in the identification of Odinga’s running mate.

Political allies of the President are quoted as confirming that the deputy president’s slot will be reserved for the ruling Jubilee Party, as part of the Azimio La Umoja Movement’s plan to tap votes from the populous Mount Kenya region.

Murkomen says Kenyatta will try to use the Building Bridges Initiative (BBI) to establish himself as a marionette similar to Russian President Vladimir Putin.

“BBI was the medium for which “KaPutin” was to be established. We were told he is “too young to retire.”In this elections President Uhuru is going for a 3rd term via a puppet,” shared Murkomen via a tweet.

BBI aimed to restructure the so-called winner-takes-all electoral system, by expanding the executive and parliament “to divide the spoils of victory more evenly.”

But it was seen by critics as a way to enable President Kenyatta, who is barred from running for president again in the August 9 vote to remain in power by creating the post of prime minister.

President Uhuru Kenyatta (right) with Elgeyo Marakwet senator Kipchumba Murkomen (left) at State House, Nairobi
Chief Justice Martha Koome-led Supreme Court bench  will render their verdict that will either put an end to the BBI reggae or revive it on February 14.

The High Court and the Court of Appeal in 2021 had ruled that the process of amending the Constitution was unconstitutional, null and void.

READ ALSO  US-based nurse killed in Kenya, body dismembered and thrown out of a speeding car
Related Topics:MurkomenNewsUhuru
Up Next