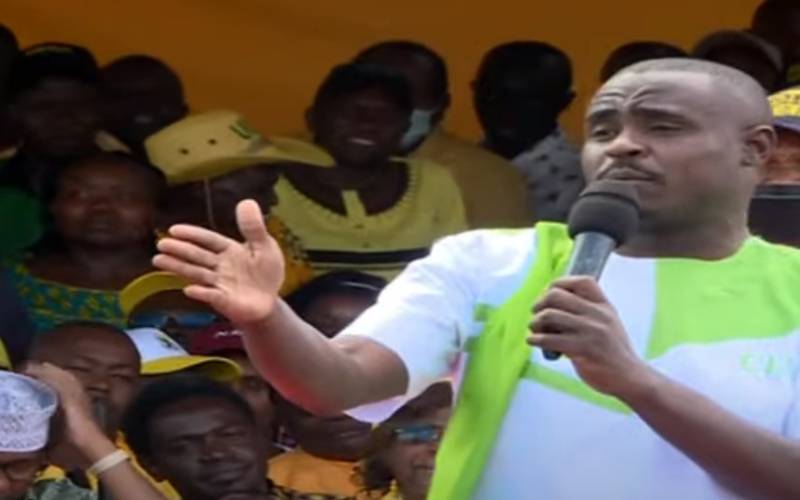 Kakamega Senator Cleophas Malala has said  his name has changed to Cleophas Kiprotich.

“Your enemies are not my enemies,” he said adding: “My party leader said recently that we all have a right to associate with whomever we want.”

Malala said ODM leader Raila Odinga will not br the fifth president but will be lose the election for the fifth time come August 9th. Mala has in the recent past been seen as warming up to William Ruto. Watch:

Malala’s attendance of Ruto’s event comes one week after the DP made a surprise stop over at a function where Malala hosted a football tournament on December 31.

“Malala, I have heard you asking me: ‘why did you come [to the tournament]? Why did you come without alerting us? The protocol team wasn’t made aware, and, as a result, there’s no red carpet rolled out for you’,” Ruto said at the time.

“I couldn’t reach you (Malala) because your boss, Musalia Mudavadi, plays a superior league to yours, and you know it. So, I reached him (Mudavadi), and he gave me the permission to grace the function.

“I respect Musalia Mudavadi, and I couldn’t come here without alerting him,” said the DP, revealing that he had initiated talks with Mudavadi for a possible coalition.

“The DP graced my football tournament on December 31 last year. In a bid to reciprocate, I have attended his rally here in Eldoret today. I bring the greetings of my Party leader Musalia Mudavadi. On January 23, ANC will hold its national delegates conference. On that day, we will unveil Musalia Mudavadi as our presidential candidate, and we’ll also allow Mudavadi to reach out to DP so that they can work together,” Malala said during his speech at Eldoret.

ANC, however, in a statement on Twitter on Saturday, said it hadn’t sent a representative to Ruto’s rally in Eldoret.