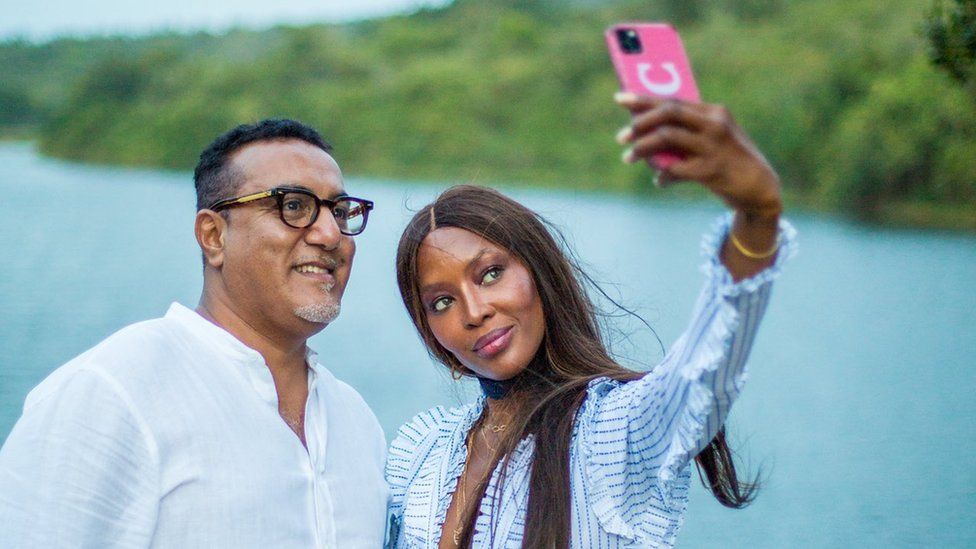 Bristish Supermodel Naomi Campbell, who, last month, was appointed by Kenya Tourism Ministry to promote Kenya abroad as the Magical Kenya International Brand Ambassador amid disapproval from some quarters, has irked Kenyans again, this time with a major gaffe.

On Tuesday evening, Campbell shared a 2:43 minute video clip on Instagram which has more than 10 million

The song, In My Maserati, which was sung by Nigerian artist Olakira, can be heard in the background as she showcases Kenya’s vast coastal beauty and its people.

In her first statement since she was appointed by the Ministry of Tourism headed by CS Najib Balala, Ms Campbell said that she was honoured to be Kenya’s International Ambassador.

“I feel so privileged and honoured to be confirmed as Magical Kenya International Brand Ambassador. Not just because of the obvious benefits that tourism brings to an economy but also I am proud to be able to represent such an important country as Kenya,” she said.

According to the supermodel, Kenya is known for its astounding areas of natural beauty, the beaches and of course the wildlife but there is much more.

In the video clip, she showcases different sceneries, local cuisine, white sandy beaches and other attractions which one can enjoy.

“Kenya has a history going back 100 million years and is considered by many to be the cradle of civilisation so I am humbled to be talking about the country,” she added.

She said, in her post, that the people are the wealth of any nation and it is no different with Kenya.

“Its people have excelled in the arts, sciences, political thought, and sports just to name a few.”

Campbell praised tourism, saying that it brings jobs to the local economy which is vital to so many small and big entrepreneurs.

“It helps unleash ideas, creativity, talent and makes for worthwhile and productive lives.”

She added, “Tourism is vital on many levels and it is my hope that I can play a small part in helping remind the world about Kenya and on a bigger level wouldn’t it be wonderful if Kenya could help inspire the world after this terrible pandemic we have all been through. Reminding us to be grateful for nature’s beauty and enduring history of our wonderful planet.”

Despite the praises, Ms Campbell is courting more controversy due to her song choice, weeks after Balala was forced to explain his decision to appoint her the tourism ambassador.

Read: Balala: This is why I picked Naomi Campbell as tourism ambassador

“Naomi Campbell will be Magical Kenya’s International Tourism Ambassador. That doesn’t take away from our domestic market, it only strengthens it. #MagicalKenya,” tweeted Mr Balala.

In an official statement in January, the Ministry of Tourism and Wildlife said Ms Campbell had been tasked with promoting Kenya as an ideal tourism and travel destination to the world.

Kenyans queried why the position was not given to a prominent Kenyan like Hollywood actress Lupita Nyong’o, while others rushed to her defence, saying the debate already justified her role.

Kenya’s tourism sector has been badly hit by the Coronavirus pandemic, with visitor numbers going down by 72 percent between January and October last year.