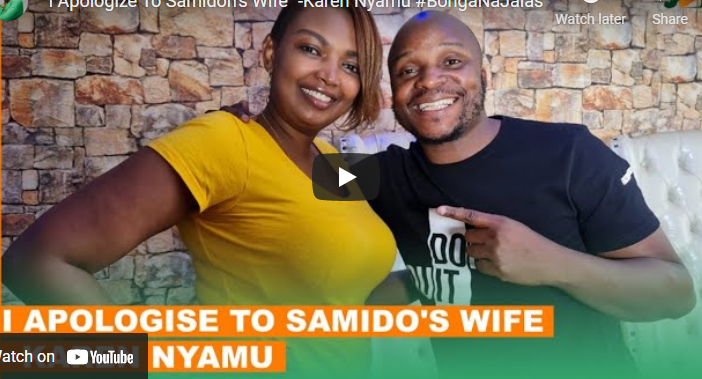 Lawyer and politician Karen Nyamu, ‘baby mama’ to Mugithi croonerSamidoh, says she did not know the singer was married when they started dating in 2019.

In a media interview on Wednesday, February 3, Nyamu said she learned four months into their relationship of Samidoh’s marriage to Edith Nderitu from Nairobi nominated MCA Mary Njambi.

Setting the record straight following days of explosive drama, Nyamu said the singer assured her that Edith knew about the affair, which led to the birth of her son in December 2020, and denied claims that she is a homewrecker.

“I don’t think I confused Samidoh. We met at a political event that he was performing at, and we became friends. I didn’t know Samidoh was married because he was not even wearing a ring.

I came to know after being his friend for around four months…. I am not making excuses. These things happen; a lot of women live this life. The only thing I have a problem with is people thinking I am a homewrecker – that I was doing things to compete with the wife and all that,” the city politician told radio host Jalang’o during an online show.

“I told him this is a very emotive issue for me as a mother. I don’t like these comments. You love your child, why are you hiding him? You’ve told me your wife knows about this, that you sat her down. But yesterday I realized it is not true, he hadn’t…

I was not posting videos to Samidoh’s wife, who I was told already knew about the situation, I was posting to claim the identity of my son and that is something I do not regret because what I wanted to achieve, which is my son being claimed, did it happen yesterday or not? He claimed his son finally. Now we are good… We do not have an issue there, of claiming (With my daughter), we are family. When we had my daughter’s birthday, which Samidoh attended, they interacted… The situation should have been handled better by Samidoh. Why did he let me go wild?” Posed Nyamu.

Nyamu said she harbors no ill will against Edith and has no intention of edging her out of Samidoh’s life. She said she has been supportive and is not sold on marriage, let alone being the second wife to the Mugithi star.

“Samidoh is a family man. He really loves his children and wife… I don’t want to [be Samidoh’s second wife], let me not go into those details, but we have and are raising a child; that is forever. This issue is not about Samidoh. It just happens that I’ve have had this past where married men pursue me seriously. So, I shy off from marriage. I don’t see marriage as true,” she said.

In his apology after Nyamu went public with a video of him sharing a moment with their child, Samidoh admitted to the affair and vowed to support him (their son) emotionally and financially.

“I am sorry!!! I have put my family and myself in a bad situation. It is true I had a friendship with Ms. Karen Nyamu and it’s this involvement that led to the birth of an innocent child whom I have and will always support both emotionally and materially. I am a proud father to my children.

I am however perturbed by the motive and timing of these past videos which have led to unnecessary trolling of the child and my wife, I have never left my wife of 11 years for another woman. I apologized to her and my family before. I now apologize to you my fans for setting a bad example. I take full responsibility for my mistakes which I regret. We have had our own shares of ups and downs, but we are stronger and happy together,” shared the star.

I’m grateful for each day that I’m alive